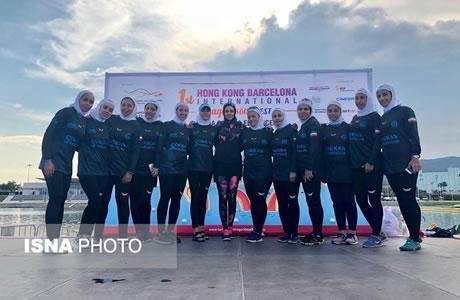 Yaghoutpour also explained in this interview, that the circumstances for the Iranian women’s rowing team is horrible and they do not have any place for prep exercizes. As a result, she said, “the athletes in this field have to do their exercizes in the sewage and there has been no improvement in this situation.”

Yaghoutpour added, “We need a dock where we can get on our boats but this has not been provided yet. The athletes have to step into mud mixed with black water… All around the exercize area is covered with sharp shells which injure the athletes.”

She further explained, “There is no trash can nor any water taps in the place for exercize in Bandar Abbas for the athletes to wash their hands and feet after the exercize. Unfortunately, the athletes do their exercizes under such circumstances and no one can sense these problems as the athletes do.”

This member of the Iranian women’s rowing team also explained some of the problems they face in group exercizes. She said, “For group exercizes, the athletes have to buy their own ores which have to be provided by the rowing delegation. Athletes have to endure numerous problems and we have rarely seen any changes in recent years.”

Despite such deplorable conditions and lack of any form of government support, the Iranian women’s rowing team won the second place in Spain’s intercontinental rowing tournament in the 200-m dragon boat competitions among 12 teams. (The state-run ISNA news agency – June 10, 2018)

Women's participation in protests in Shiraz, Borazjan was remarkable