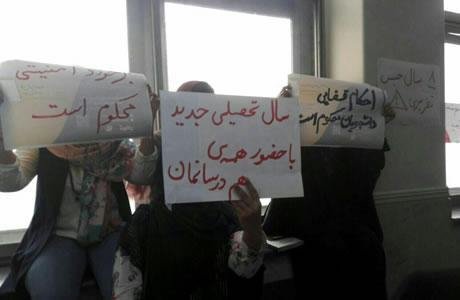 Women participated in protests in Tehran, Rasht, and Mashhad

Women participated in protests in Tehran, Rasht, and Mashhad.

A group of representatives of the employees of Edalat Stocks Cooperatives held a protest along with members of their families for the second consecutive day on Tuesday, June 19, 2018, outside the Ministry of Economy in Tehran. Women participated in this protest in good numbers.

Some 1,500 employees of Edalat Stocks Cooperatives who work at different offices have not received past-due wages of 39 months.

Also young women participated in the protests of Tehran University students with an active presence. Young men and women studying at Tehran University held protests for two consecutive days on June 18 and 19, 2018, against heavy sentences issued for the students arrested during the uprising in January. They did not attend their exams. A number of Tehran university professors, including female professors, also participated.

The arrested students are 18 to 22 years old and one of the students who has received an 8-year sentence was born in 1996 and is only 21 years old.

On another front, women plundered by the fruadulent Caspian Financial Institute in Rasht, capital of Gilan Province in northern Iran, held another noisy protest on Tuesday, June 19, 2018, outside a Caspian branch. Addressing the regime’s officials in their slogans, they demanded their savings back.

Women plundered by Caspian in Mashhad, capital of Razavi Khorasan Province, participated in protests for two consecutive days on June 18 and 19.

Men and women retired from the Education Ministry held a protest on Monday, June 18, outside the Ministry of Education in Tehran and demanded their bonuses.

Women were also part of another protest in Tehran on Monday in the Guisha District where they have been cheated by a constructoin company.