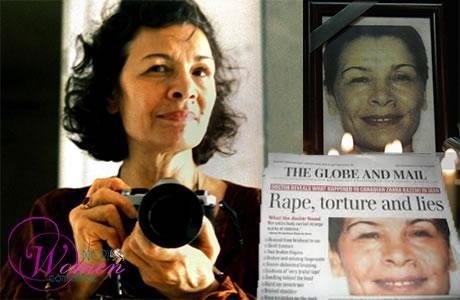 Mysterious death of Zahra Kazemi is unraveled after 15 years

Mysterious death of Zahra Kazemi is unraveled after 15 years.

On July 11, 2003, an Iranian-Canadian journalist, Zahra Kazemi, was pronounced dead at Baghyatollah military hospital in Tehran.

Zahra Kazemi had been arrested on June 23, 2003, outside the Evin Prison in Tehran while she was taking pictures from a gathering of the families of Evin prisoners.

Initial reports and testimonies indicated that her death had been caused by harsh beating while in custody and more specifically by blows to her head.

The Iranian authorities, however, concealed the truth and misled judicial investigations to hush up the controversy surrounding the death in custody of a dual national in an Iranian jail.

On July 16, 2003, it was announced that Zahra Kazemi had died of a brain stroke.

On July 23, 2003, despite objections by her son, Stephan Hachemi, who wanted to take his mother’s body to Canada, Zahra Kazemi’s body was hastily buried in Shiraz, her birth place.

In an interview on July 30, 2003, Zahra’s mother, Ezzat Kazemi, revealed that she had been under intense pressure by the authorities to agree with her daughter’s burial in Iran.

Since the day after her burial, Stephan, Zahra Kazami’s only child, has been demanding exhumation of her body and its transfer to Canada.

Zahra Kazemi’s family lawyers repeatedly criticized the legal procedure of dealing with her case. The lawyers were not permitted to summon their witnesses to the primary or the revision court, to shed light on the truth. The witnesses included some high-ranking Judiciary officials.

At the same time, a number of prisoners, physicians and others who commuted to Evin, published documents indicating use of torture by Tehran’s Prosecutor, Saeed Mortazavi, and other IRGC members. Judiciary and Intelligence Ministry officials, however, either refuted the documents or raised other matters to overshadow the truth about the mysterious death of Zahra Kazemi and divert the public opinion.

Fifteen years on, thanks to the nationwide uprising last winter, rival factions have been revealing parts of the truth on the regime’s crimes and embezzlements, to wash their own hands and claim innocence. One such revelation is about the mysterious death of Zahra Kazemi by Tehran’s then-Prosecutor, Saeed Mortazavi, a notorious regime official also implicated in the murder of protesters arrested in the 2009 uprisings in Kahrizak jail.

Following are excerpts of reports which appeared in the state-run press revealing parts of the truth on the atrocious murder of Zahra Kazemi.

In an interview with the state-run daily Iran, on February 20, 2018, mullah Ali Younesi, the former Intelligence Minister, touched on the role of Saeed Mortazavi, Tehran’s Prosecutor at the time, in the mysterious death of Zahra Kazemi.

Younesi told Iran, “From the Intelligence Ministry, two experts interrogated her at a hotel and officially announced that technically and scientifically, Zahra Kazemi was not a spy. But Saeed Mortazavi, the incumbent Prosecutor of Tehran, insisted (that she was a spy) and transferred the file from the Intelligence Ministry to the Intelligence Department of the State Security Force. During the inspections before being transferred to the detention center, Zahra Kazemi resisted and refused to hand in her belongings. This is when she was beaten up as a result of which her head hit the curb and she started bleeding.”

Younesi continued, “If she had been transferred to a hospital on time, she would have certainly been saved. Then, no court, not even the Canadian ones, could hold the Islamic Republic responsible for her death. The blame would have been placed on a low ranking agent held accountable for his negligence.”

In another article published on February 26, 2018, on the mysterious death of Zahra Kazemi, the Iranian-Canadian journalist, Iran daily cited an interview by Zahra Kazemi’s lawyer with Etemad Online.

According to the report published by Iran daily, Saifzadeh, Zahra Kazemi’s lawyer, while confirming Ali Younesi’s story, brought up another issue. Saifzadeh said, “The deputy prosecutor said it was not a deliberate murder, it was unintentional. He said they had reached an agreement to arrest two Intelligence Ministry agents in this connection.”

Saifzadeh also said, “When the file was in our hand, the presiding judge agreed with us but suddenly the judge was replaced and the file went completely off the course.”

How were the investigations misled?

Iran daily also published a story citing Tajernia, a former member of the parliamentary National Security Committee of Majlis, revealing another attempt to conceal the mysterious death of Zahra Kazemi.

Confirming the statements made by Younesi and Saifzadeh, Zahra Kazemi’s family lawyer, Tajernia said, “At that time, the National Security and Principle 90 committees simultaneously looked into this case. Mortazavi was not satisfied with the interrogations and the examination process because he was engaged in a spy-making project and the outcome of the investigations did not meet his desires. So, he transferred the case to the State Security Force. In fact, they did so to change the course of the investigations.”

The report of the Principle 90 Committee which did not attract much attention at the time, also contains some interesting information.

The report points to a parliamentary meeting on July 29, 2003, convening in the presence of the ministers of Justice, Intelligence, and Health as well as the general director of the foreign press and media, Khoshvaght.

According to this report, Khosvaght told the meeting, “It was on Saturday, July 12, when Mr. Mortazavi’s office called and told me that he wanted to definitely see me at 3 p.m.… I went there and he immediately said that this lady had died. ‘How are you going to report this?’ Mr. Mortazavi then insisted that we should write for the reporters that the lady was not feeling well while she was being questioned by the Intelligence Ministry interrogators, and was taken to hospital where she had a brain stroke and died. Mr. Mortazavi insisted that I write that the Intelligence Ministry did not endorse her, either.”

Khoshvaght said his hesitation to do so made Saeed Mortazavi threaten him with arrest and detention in that meeting.

The report of the Principle 90 Committee also cites one of the Intelligence Ministry deputies in another part about the strokes inflicted on Zahra Kazemi. He said, “Investigations show that she had been dealt with blows at two stages. The first stage was when they wanted to take away her backpack and she refused. A severe blow to the left side of her face threw her to the ground. Hospital medical reports on the scars verify this. At this stage, she was in the hands of several honorable judges of the Evin Prison. A soldier at the tower, the prison’s personnel, and other soldiers there, who were about 20 people attested to this fact in their primary testimonies.”

According to this official, “subsequently, the witnesses were gathered and briefed… so that they would withdraw their testimonies. This was done by counterintelligence officials of Evin Prison.”