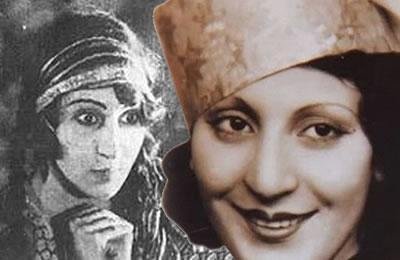 The first non-silent Iranian movie, The Lor Girl, was screened in 1933 in Tehran. Sedigheh Saminejad starred in the movie, playing the role of Golnar, the Lor girl.

Sedigheh Saminejad (a.k.a. Rouhangiz) was the first Iranian actress to appear in a non-silent movie.

Saminejad was born on June 24, 1916, in Bam, a city in the southern Iranian province of Kerman. Shortly after beginning high school, she married Reza Damavandi who worked in India. She later moved to India with her husband.

The movie The Lor Girl was made by Ardeshir Irani and Abdol-Hossein Sepenta. Sepanta, an Iranian poet, writer and journalist, traveled to India to study the influence of ancient Iranian culture on the country. Sepenta worked with Irani, a movie director, to produce The Lor Girl while he was in India, since Iran had no resources to produce movies at the time.

Lack of access to an Iranian actress to play the leading female role frustrated them. Sedigheh Saminejad, whose husband worked for the Hindi Imperial Film Company in Mumbai, volunteered to play the role after getting her husband’s permission. The movie took seven months to make and was shown in Iran in 1934 where it was an instance hit. She played in another movie entitled, Shirin and Farhad.

Sedigheh Saminejad, a Muslim, was regularly harassed physically and emotionally by family members and others in Iran and in India who did not tolerate a Muslim woman playing in a movie. As a result, she gave up acting after her second movie.

One of the documentary filmmakers who met with Mrs. Saminejad in 1971, 38 years after the film was shown in Tehran, says, “This film has been a nightmare for the whole life of this woman. She told me that she was really torn at the hands of the fanatics her entire life.  And I assert that no comment or opinion about the movie, other than hers, the person who lost the peace of her life because of the movie, is valid. While smiling with tearful eyes, she said the fanatic Iranians would physically harass her and throw bottles at her. She had to enter and exit the studio with a body guard. Because of all the harassments from the family members and others, she continued, she never felt compelled to play in any other movie.”

After living in India for six years, she returned to Iran with her husband. Shortly after, she divorced her husband and moved in with her mother in Tehran. She found a job at the Jiroft Clinic and was paid 200 Iranian toumans. As a pre-condition for joining the Cultural Ministry, she had to take the ninth-grade elementary exit exam to receive a passing certificate.

The famous historian Bastani Parizi who was at the time a reporter for the Ettela’at newspaper writes about her: “While I was proctoring the ninth-grade exit exam, I noticed a depressed old woman taking the exam. I asked who she was and why was she taking the exam. One of the attendees asked me quietly, do you not know her? She is the Lor Girl.” (Ettela’at weekly, July 20, 1956).

The first Iranian actress lived the last 20 years of her life away from the art and culture circles and died poor and alone on April 30, 1997.

A chocolate box containing the message of emancipation