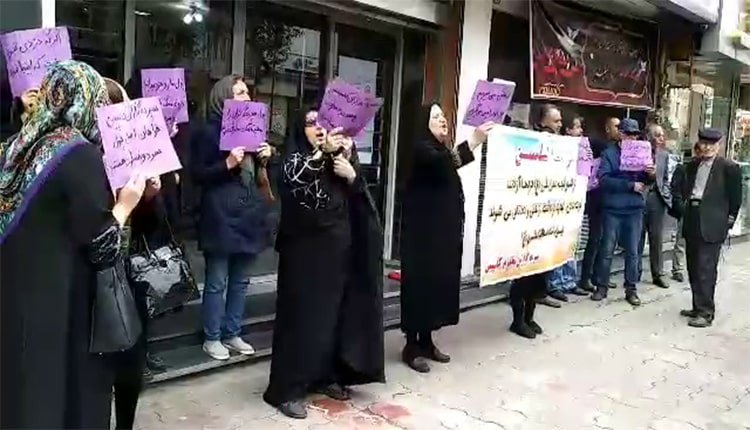 On Tuesday, November 6, 2018, a group of defrauded clients of Padideh Shandiz held a protest outside the mullahs’ parliament in Tehran and demanded reimbursement of their funds and properties.

On Monday, November 5, 2018, a group of the residents of Mashhad, accompanied the family of Mr. Hashem Khastar, in their protest outside the Ebn-e Sina Hospital, demanding his release. An activist of the Teachers’ League, this retired teacher was arrested arbitrarily at home on October 24, 2018.

The State Security Force arrested two women, Mr. Khastar’s son and a few other persons in a bid to apprehend his wife, Ms. Sedigheh Maleki.

Plundered women held protests on Monday, November 5, 2018, both in Tehran and Rasht. Women swindled by the IRGC-backed Caspian Credit Institute gathered outside the office of the mullahs’ president, Hassan Rouhani, in Tehran and also outside one of the company’s branches in Rasht.

Also on Monday, land owners in Tehran’s Moradabad of Poonak held a protest gathering because the Azad University of Research Sciences has confiscated their lands.

Medical Sciences volunteers of Tehran’s Azad University, including a considerable number of young women, protested cancellation of their registration on November 3 and 4 outside the university’s central building and outside the mullahs’ parliament.