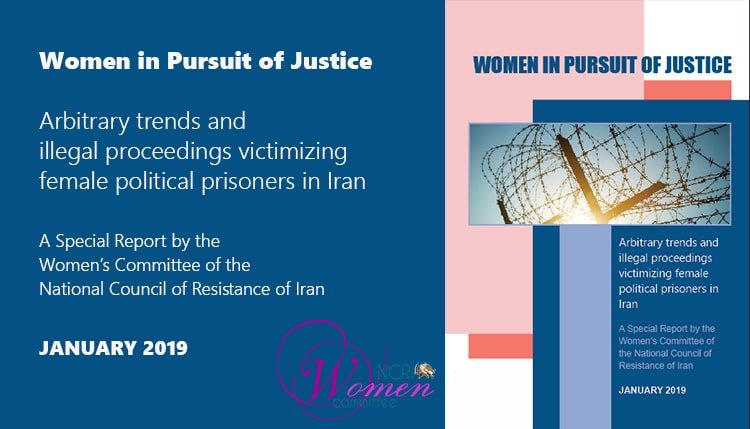 Women in Pursuit of Justice is a study by the Women’s Committee of the National Council of Resistance of Iran of the arbitrary trends and illegal proceedings victimizing female political prisoners in Iran. You can download the report here.

Updated in January 2019, the second edition of Women in Pursuit of Justice aims to shed light on the systematic violations of women’s human rights in Iran in the process of arrest and imprisonment and hopes to receive support, attention and action by human rights advocates, lawyers, and relevant authorities from around the world.

In Women in Pursuit of Justice, we have compared international laws and standards with what is actually carried out in prisons against women political prisoners and prisoners of conscience under the mullahs’ regime

The Universal Declaration of Human Rights highlights the right to freedom of all human beings and specifically the freedom to proselytize their religion and thoughts.

The International Covenant on Civil and Political Rights also states that no person shall be subjected to arbitrary arrest.

Other international laws discourage issuing prison sentences for women due to their roles as mothers and caregivers. Rule 61 of the United Nations Rules for the Treatment of Women Prisoners and Non-Custodial Measures for Women Offenders (the Bangkok Rules) reads, “When sentencing women offenders, courts shall have the power to consider mitigating factors such as lack of criminal history and relative non-severity and nature of the criminal conduct, in the light of women’s caretaking responsibilities and typical backgrounds.”

Also, the “Cross-cutting issues” in the Handbook on Prisoners with special needs – UNODC (United Nations Office on Drugs and Crime – New York 2009), it is stated that, “Imprisonment should be used as a last resort for all offenders, taking into account the nature and circumstances of the offence, the risk the offenders pose to the public and the social reintegration needs of the offenders.”

The same article reiterates that, “All prisoners have a right to health, equivalent to that in the general community, as part of their basic human rights.”

In our study, Women in Pursuit of Justice, one can clearly see that these standards are far from the conduct of the Iranian regime.  Iran is a country where women are not only imprisoned for murder, robbery and social crimes, but for demanding freedom, having different beliefs, drawing cartoons, writing a story against stoning or the death penalty, participating in peaceful protests, protesting against poverty and even for defending children’s rights.

Read the full report, Women in Pursuit of Justice, in the Documents section of our website.

Prominent role of women in major protests in Tehran, Kermanshah...