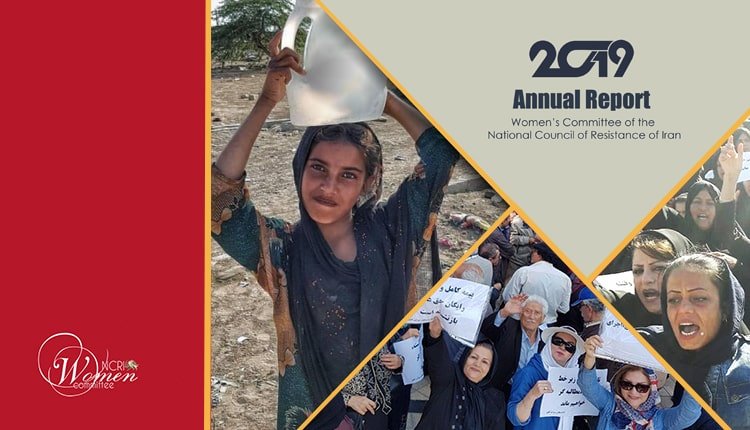 The NCRI Women’s Committee puts out its Annual Report 2019 on the eve of the International Women’s Day.

Last year, as we were preparing our Annual Report 2018, Iran was going through a massive outbreak of protests which quickly spread to some 160 cities across the country.

One year on, daily protests and nationwide uprisings have turned into a regular trend, changing the face of an oppressed nation to an arisen people crying out for “freedom and regime change” in all four corners of the country.

Iranian women also stepped up their participation in protests. They took to the streets at every opportunity. Compared to 436 protests last year, they participated in some 1,500 pickets, strikes, sit-ins, rallies and marches to demand their own and their people’s rights.

In the NCRI Women’s Committee’s Annual Report 2019, you can see that Iranian women of all ages and all walks of life, young students and retired teachers, nurses and farmers, villagers and plundered investors, all took to the streets and cried out for freedom and demanded their rights. In their cries, we heard the grievances of a nation suffering in the clutches of a bunch of corrupt rulers.

Iranian women’s impact on the democratic movement was so much that the regime’s IRGC commanders had to acknowledge their leading role on multiple occasions and confess to the larger number of arrests from among women.

Amnesty International said the arrests signal crisis in Iran human rights. Human Rights Watch called on Iranian authorities to drop all charges brought against protesters for peaceful assembly and release those detained on that basis. And the UN General Assembly urged the Iranian regime to end “widespread restrictions on the right to freedom of opinion and expression and the right to freedom of assembly” and to stop the “harassment and intimidation” of political opponents, human rights defenders, defenders of the rights of minorities and women, workers, students and environmental activists.

In the Annual Report 2019 of the NCRI Women’s Committee you can see that the fearless women who got arrested and those who were already in chains continued their resistance inside prisons, refusing to buckle under, and instead brought the authorities to their knees.

In our Annual Report 2019, the NCRI Women’s Committee endeavored to offer a more in-depth and comprehensive

look into the conditions of women in Iran since last March. We hope to enjoy more of your solidarity and support in the coming year as the courageous and determined women of Iran will be making their final moves in their quest for freedom and equal rights.