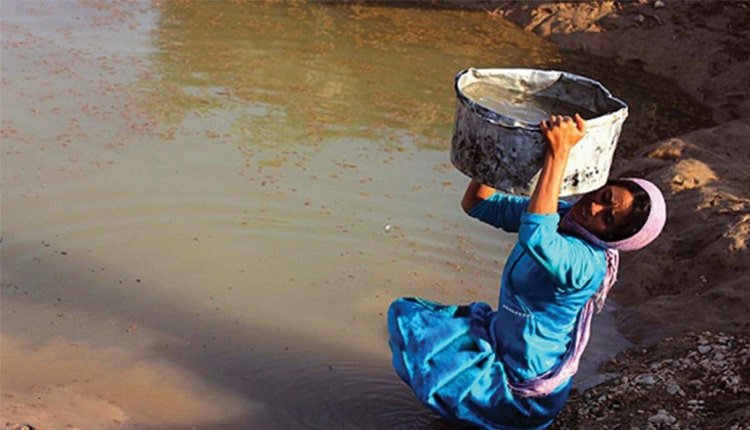 Drinking water and water shortages among problems of Iranian women

Despite the country’s vast wealth, the theocratic regime ruling Iran has not been able to upkeep the urban and rural infrastructures even at its most elementary levels. Shortage of water and clean drinking water, housing, usable roads, electricity and other basic facilities has turned women into unpaid domestic workers unable to think of their own basic human rights, such as the right to decent employment. This has prevented them from participating in community affairs which can bring about positive change to their lives.

The Iranian people are already experiencing serious water shortages. Iran’s water resources seriously suffer from inappropriate governance and lack of water management. Frequent droughts with over-abstraction of surface water and underground water have brought the state of the country to a critical level.

Signs of this situation are the drying of lakes, rivers and wetlands, reducing groundwater level, subsidence, degradation of water quality, soil erosion, desertification and dust storms.

The Environmental Organization estimates that the speed of consumption of groundwater resources in Iran, are three times as much as the global standards. This unstandardized and unregulated consumption of water is the cause of drying of 297 plains out the 600 plains in Iran. Also, 35 billion cubic meters of water is lost in the transmission path due to failure to repair the water transportation network. The Parliament’s Research Center calculated the water waste to be from 26 to 36 percent.[1]

In January 2018, the New York Times reported in a shocking article that in 50 years, 12 out of 31 provinces of Iran would lose all their underground aquifers.

Isa Kalantari, the head of the Environmental Protection Agency, acknowledged that water scarcity would lead to forced migration of 50 million Iranians if not properly managed.[2]

Last summer, 48% of the country’s population was under water stress, and this could expand rapidly.[3]

Two-thirds of the population of Sistan and Baluchestan province do not have access to sanitary drinking water.[4] For example, women and girls in Kenardar in Chabahar have to walk almost 30 minutes, 5 or 6 times a day to carry their drinking water and bring it to their homes using pots or water containers.[5]

The governor of Sistan and Baluchestan announced a 50 percent reduction in well water, which is the only source of drinking water for the residents of the northern parts of the province. He admitted that if this source dries up, the city of Zabul would become unlivable and everyone will be forced to leave.[6]

In Sistan and Baluchestan, the water of the Hirmand River, the main source of water supply for five cities located in the northern areas of the province and the provincial capital, Zahedan, has been cut off.[7] Managing director of Yazd Province’s Rural Water and Wastewater Company, Mohammad Fatehi, acknowledges that the water for 330 villages in this province, encompassing 22,000 people, is transported with tankers.[8]

No budget has been allocated for water from the National Development Fund in 2019.[9] Recently, 18 members of parliament from Isfahan resigned in protest against the non-allocation of funds to supply drinking water to the province.[10]

Abolfazl Mousavi- Boyuki, Yazd deputy in the mullahs’ parliament, also admitted that the regime’s parliament suspended the water quota for farmers in east of Isfahan, which led to the farmers losing their livelihood. As though that was not enough, the regime’s authorities are suggesting limiting the share of upstream water in Zayandehrood dam or the Chahar Mahal dam to this region.

The issue of water scarcity is seldom reported in government media. However, due to the protests during the spring and summer of last year, one can realize that the situation in different cities and provinces has become intolerable.

Khuzestan and its cities, including Khorramshahr and Abadan, face unprecedented water shortages. For quite some time now, the drinking water from the faucets in Khorramshahr has been saline with the foul smell of sewage. This situation led to mass protests last summer and, as expected, was met with violence and arrests.[11]

On March 31, 2018, a group of women in the Golshahr City of Imam Reza in Roodbar (Kerman province) gathered outside of county governor’s office to protest the problem with their drinking water. Golshahr citizens have repeatedly protested frequent water stoppage but have not received any response.

On May 27, 2018, following 8 days of water stoppage, the residents of Khoshkabad Village in Minab gathered in protest in front of the rural water and waste water company and demanded a solution to the problem.

On May 30, 2018, the residents of Yas Masjid in Bukan, Iranian Kurdistan, marched in protest of the lack of water and gas to the governorate of the city. The active presence of women in the protest was significant. [13]

On June 23, 2018 in Bushehr, women protested 55 days of dehydration in Dashtestan. One of women participants said, “We have no water to drink, bathe or wash our clothing.”[14]

The people of Borazjan, located in Bushehr Province, also demonstrated in July in the vicinity of the Mellat Bank in front of the governorate of the city.[15] Thousands of people gathered in the city for several days and protested till late in the evening carrying signs that read, “We do not have water.”[16]

These gatherings continued in Borazjan on the last days of July. A woman living in Borazjan showed an empty bottle of water and said that they have not had water for 10 days.[17]

In the same period, women and people in the Barchi Sarcheshme area in Kerman province gathered in front of the copper complex, closing down the main road in protest of water scarcity.[18]

On September 17, 2018, a number of people supported by a significant number of women from Rudbar Kohbani city in Lorestan Province, gathered in front of the governorate and road and urbanization office in Kuhdasht city to protest roads and water problems.[19]

[1] The website of Tehran’s Chamber of Commerce, Industry, Mines and Agriculture, www.tccim.ir/news/, January 6, 2019

[3] The website of Tehran’s Chamber of Commerce, Industry, Mines and Agriculture, www.tccim.ir/news/, January 6, 2019

[9] The website of Tehran’s Chamber of Commerce, Industry, Mines and Agriculture, www.tccim.ir/news/, January 12, 2019

Ameneh Zaheri Sari held in limbo after 4 months of detention