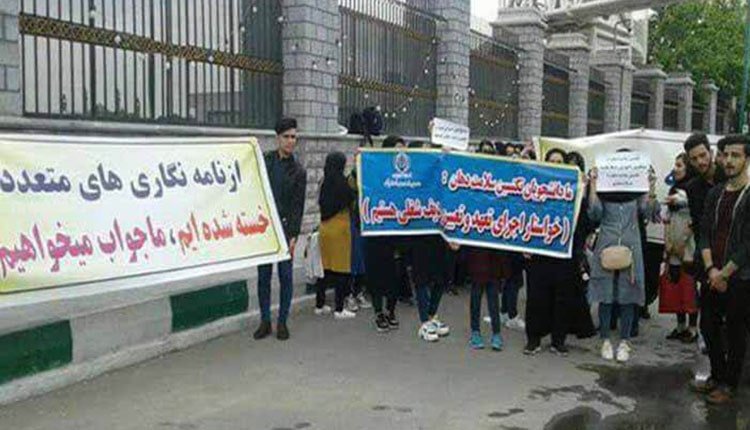 Defrauded investors of Samen ol-Hojaj credit institute held a protest gathering on Sunday, May 5, 2019, in front of Tehran Central Bank.

On the same day, another group of defrauded investors held a protest gathering outside the SAIPA Diesel Co. in Tehran. The protest was against the company’s failure to deliver the cars paid for last year and to respond to the customers’ demands. In a sign of protest, all the participants wore yellow headbands.

On the same day, dental technician students held a protest gathering across from the regime’s parliament protesting the uncertainty of their future jobs and statement issued by the Health Ministry preventing them from continuing their studies. Female students were active in this gathering. The students’ banners read, “We are tired of writing numerous letters, we want answers.” The students had previously held a protest gathering outside the Ministry of Health.

A group of customers who had registered to buy cars from Ramak Khodro Company held a protest gathering on Saturday, May 4, 2019, outside the Ministry of Justice to express their protest against the high prices announced by the company, its failure to deliver their cars and respond to their demands. (The state-run Fars news agency – May 4, 2019)

On May 4, 2019, the families of labor activists arrested during the International Labor Day gatherings, gathered in protest outside the Evin Prosecutor’s Office to inquire about the situation of their children. Evin Prison officials have not yet responded to their inquiries.