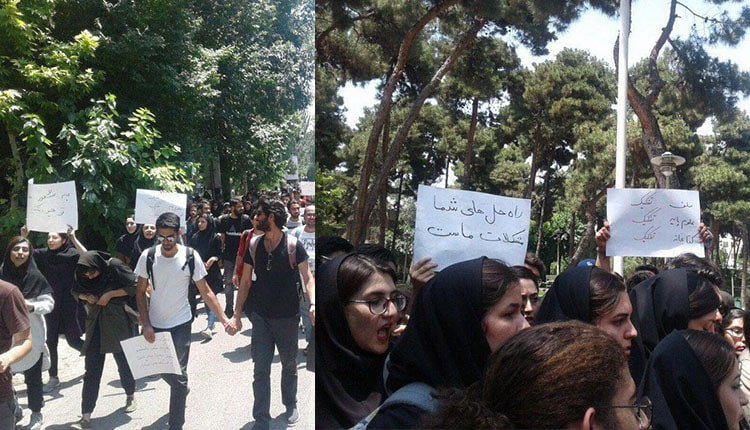 Tehran University students of the School of Social Sciences, as well as the students of the universities of Science and Industry and Sharif in Tehran, held protests on Wednesday, June 26, 2019. Young women and female students were actively involved in all of these protests.

It was the second day that Tehran University students of Social Sciences were holding protest against the arrests of Marzieh Amiri, Leila Hosseinzadeh, and other students who have been arrested on different occasions and handed down heavy sentences.

The students of the University of Science and Industry in Tehran held a gathering and marched on their campus in protest to gender segregation. The students held placards denouncing the repressive atmosphere at their university as well as the policy of receiving tuitions and various fees from students.

The students of Sharif Industrial University also held a protest gathering demanding food services during summer in their dormitories. They gathered outside the Dean of Students’ building and held placards which read, “We have a very simple demand, we want food during summer.”

On Saturday, June 29, 2019, the defrauded clients of Azin-Khodro car company held a protest gathering in the big mosque of Karaj, demanding their money back from the Alborz Organization of Industry, Mines and Commerce.

Doctors working at a medical clinic in Gachsaran, in the southwestern province of Kohgiluyeh and Boyerahmad, went on strike for three days from June 25 to 27, protesting the clinic’s failure to pay their fees and salaries.

On Thursday, June 27, 2019, a group of residents of Firouzabad, the southern Iranian Fars Province, held a protest against the construction of a stone cutting company in the Tang-e Mehrak which is one of the historical and tourist sites in this city. They said the activities of such a company would destroy this natural and historical site which is considered among Iran’s national wealth. (The state-run Fars news agency – June 27, 2019)