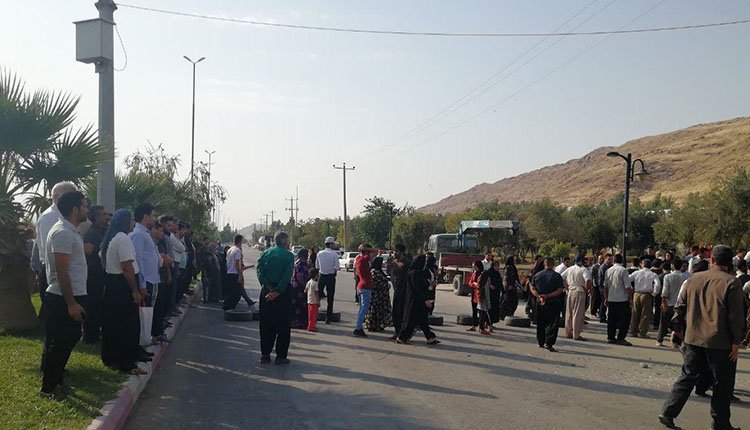 The earthquake-stricken and deprived women of Sarpol-e Zahab protested against the power outages of their trailers and tents by municipality officials.

Sarpol-e Zahab was the center of the earthquake last year. The powerful earthquake destroyed whole buildings and ripped off their facades in the western Iranian province.

In another protest gathering, on Monday, July 22, 2019, retirees and a number of agricultural observers and employees of Saham-e Edalat held a protest rally.

The retirees of the Shiraz Telecommunication Company gathered in front of the Ministry of Industry, Mining, and Commerce in Tehran to protest against the nonpayment of their employment salaries. (The state-run ILNA News Agency – July 22, 2019)

A number of agricultural observers from across Iran gathered in front of the Ministry of Agricultural Jihad in Tehran in protest to the lack of law for recruitment and permanent contracts. (The state-run ILNA News Agency – July 22, 2019)

A number of workers and employees of Saham-e Edalat also gathered in front of the parliament and stated that they would continue their protest rallies until their problems are resolved.

Women participated in all the protest rallies on Monday.