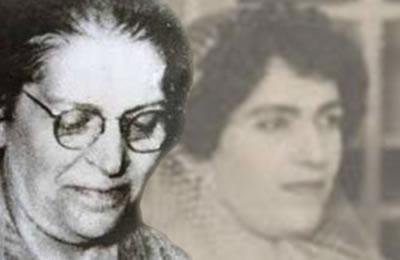 Sedigheh Dola-Abadi was a freedom loving woman and one of the first advocates of women’s rights in Iran.

She was born to a religious family in Isfahan in 1882.

Her father was Mirza Hadi Dolat-Abadi, a progressive clergy living during the Qajar dynasty. She died at age 80 in 1962 and was buried next to her brother, Yahya Dolat-Abadi, in Emamzadeh-Esmail cemetery in Tehran. Yahya Dolat-Abadi was one of the leaders of the Constitutional Movement and a leading cultural figure.

Dolat-Abadi family were strong supporters of the Constitutional Revolution. She had learned patriotism and devotion to country from her family. In one of her letters she wrote, “I am able to work anywhere in the world, but as long as my country’s women need me I will not be going anywhere. I will devote my time and skills to the [Iranian] women. I will not exchange the soil and girls of my country for a better life elsewhere.”

Sedigheh Dolat-Abadi completed her elementary school studies in Tehran and attended Dar-ol Fonoun High School for post-elementary studies. The Dar-ol Fonoun was founded by Amir Kabir also known by the titles of Atabak and Amir-e Nezam, chief minister to Naser al-Din Shah. Amir Kabir was known as one of the most capable and innovative figures in that period.

In 1906, during the Constitutional Revolution which brought relative freedoms to Iran, Sedigheh Dolat-Abadi and a number of her female friends established the Association of Homeland Junks to fight against the reactionary and misogynist fundamentalists led by Sheikh Fazlollah Nouri.

Sedigheh Dolat-Abadi strongly opposed the 1907 agreement between the Russians and the British wherein the two powers divided Iran into virtual northern and southern areas of influence.  She showed her opposition by boycotting Russian and British goods and engaging in activism against the two.

In 1917, when she was 35 years old, Sedigheh Dolat-Abadi founded a girls’ school named Maktab-e Shariat in Isfahan. Two years later, she published a new bi-monthly magazine named Women’s Language to educate and familiarize women with their education and social rights and economic independence. Because of Dolat-Abadi’s activism and opposition to the government policies and mandates, her magazine was banned and her life was threatened. She moved from Isfahan to Tehran in 1921 and re-started Women’s Language as a 32-page monthly magazine. She also established a new school for girls from low-income families and founded a center named “Women’s Challenge.”

Dolat-Abadi represented Iran’s women at the International Congress for Women in Berlin in 1921. She was the first Iranian woman to give a speech at an international gathering.

In 1922, Dolat-Abadi traveled to Germany for medical treatment and from there traveled to France.

In France, she studied French and attended a women’s college for three years. Dolat-Abadi then attended Sorbonne to earn a degree in education.

Dolat-Abadi represented Iranian women at the 10th International Congress for Women’s Right to Vote in Paris in 1926 and once again gave a strong speech there.

With the support from the government in 1935, Dolat-Abadi founded “The Women’s Society” and served as its president. The Society provided elementary and high school education as well as courses on sewing, playwriting, music, and athletics for adult women.