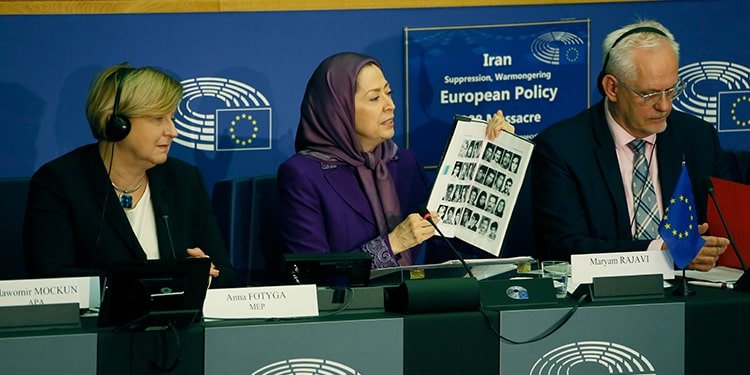 At a conference in Strasbourg, Iranian opposition leader calls for firmness against Tehran mullahs

In the meantime, she introduced a book containing the names of 5,000 victims of the 1988 massacre in Iran, at a conference at the European Parliament.

The EP conference, entitled, “European policy vis-à-vis Iranian regime’s suppression and warmongering, massacre of political prisoners in 1988,” was sponsored by the Friends of a Free Iran at the European Parliament and chaired by former Foreign Minister of Poland, MEP Anna Fotyga. In her opening remarks, Mrs. Fotyga warmly welcomed the President-elect of the National Council of Resistance of Iran, Maryam Rajavi, as the “very brave leader of opposition to the regime of Ayatollahs,” adding, “All of us are aware of the situation of Iran. We’ve been monitoring it quite tensely for many years, already. In the very beginning of this ninth legislature, the European Parliament adopted a resolution, which gained a big majority, condemning the persecution of the brave women of Iran. We stay in touch with representatives of Iranian opposition, learning about the fate of people who fight for their freedom, for their human rights and for prosperity of their country.”

Then, the NCRI President-elect Maryam Rajavi addressed the conference. In introducing the new book, “Crime Against Humanity,” she said, “If I were to summarize the situation in Iran after 40 years of the rule of religious fascism, I would say: Iran is a massacred country where, in addition to political prisoners, its natural resources, culture and environment have all been massacred. This is not just a book containing the names of victims, but a historic testimony on how Iran has been taken hostage by the fascist medieval theocracy.”

Referring to the 1988 massacre of 30,000 political prisoners in Iran and its perpetrators, Mrs. Rajavi pointed out, “Sixty-three percent of the perpetrators presently hold official positions in the mullahs’ regime. The regime’s current Judiciary chief Ibrahim Raisi, the Justice Minister, the deputy parliament spokesman, and several senior judiciary officials were members of those death commissions. The mullahs’ supreme leader, Ali Khamenei, was the president at the time. Hassan Rouhani was the acting deputy commander of the armed forces at the time.”

Addressing the adverse impact of the policy of appeasement of Western governments, Mrs. Rajavi added, “Not held to account for such a horrible crime, the regime spread its war to the Middle East which is still continuing… I have come to propose to the European Union to adopt a realistic and necessary policy on Iran and the Middle East… which necessarily requires lending support to the Iranian people’s resistance to establish democracy and popular sovereignty.”

Mrs. Rajavi concluded her remarks by recalling the words of Zahra Bijanyar, one of the women executed in the 1988 massacre. Zahra wrote: “I have learned that oppressors cannot take our lives, even if they cut our bodies into pieces. We live on as long as we are firm in our faith. Our lives can be taken away only when we sell out our faith and hearts. And this is the secret to resistance of our human world.”

“In these words, Zahra is urging the world to resist against tyranny and oppression and support those who fight for freedom and democracy,” Maryam Rajavi stressed.

A number of the MEPs addressed the issue of women’s rights in Iran. The suicide of a woman who entered a stadium disguised as a man is a sad tragedy, but it is just an example of what is going on in Iran. The European Parliament should make the case for women’s rights and human rights in Iran. It is time to call on EU diplomacy to make sense to its founding values and make the case against the death penalty wherever it takes place. The only solution is to support the NCRI and Maryam Rajavi

More than 40 years of torture and execution and the export of terrorism by the regime of Iran leaves no question to the nature of the problem. Let us find a solution.

One approach is trying to get along with this regime. It has proven not to be a solution at all. This is playing into the hands of the regime. All that is happening now in the 21st century. The EU’s policy has seriously damaged its reputation in Iran. The only solution is to support the serious opposition that the regime fears, which is the NCRI and Maryam Rajavi. Full support for Maryam Rajavi in struggle for freedom and democracy

We have adopted a firm resolution against Iran’s violations of women’s rights. The regime is blackmailing the EU. British and French nationals are held hostage in Iran. We must face this regime in a much stronger way… Maryam Rajavi, you have our full support in your struggle to achieve freedom and democracy for your people. We MEPs speak as representatives of the people of Europe. The people of Europe have great empathy with the people of Iran. The 1988 execution of prisoners in Iran is a horrific crime, but it is not an isolated event. Suppression of women’s rights, arbitrary arrests, a total lack of civil liberties, are hallmarks of Iran today….

There is a democratic alternative to this regime. It is led by Maryam Rajavi and your ten-point plan. Many members of this parliament support her. I look forward to the day when we are all able to go to a free Iran with Maryam Rajavi as its elected democratic president. Without equality for women in Iran, there is no freedom for anyone

We cannot submit to the lies and the blackmail of the Iranian regime. It affects all of us. This year, a French citizen went to see her family in Iran. She never came back. She was arrested and imprisoned on charges of espionage. The same has happened to a British woman… We need people we can confide in, who represent our values, freedom, and equality. Without equality for women in Iran, there is no freedom for anyone. We must use our voice to have their plea heard across the world. Women have been hit even harder. They have no freedom

The number of executions in Iran is very high, and it is very difficult for us to imagine. During the presidency of Rouhani, 4,000 people have been hanged. No country kills its own citizens in such numbers. Women are hit even harder. They have no freedom.

We see the brutalities in Iran, but our representatives in Europe are only interested in trade with Iran. Our parliament has a duty to speak out and call on the European Commission to stop their relations with Iran and impose sanctions on this regime for its human rights violations. We want democratic change in Iran. Iran is a country where fundamental human rights are trampled on because the regime does not give any rights to the people. I have heard a lot about the strong role of women in Iran’s protests and their talents in the society. I understand the heavy price that has been paid for freedom. We have to push for an end to the death penalty and the torture and imprisonment of activists in Iran.

We are here to push the European Union to base any deals with the regime on the conditions of respect for human rights and an end to executions, which does not comply with international standards and values of justice. The pain of the mothers of Iran’s 1988 massacre is still alive. What we need is the establishment of an independent inquiry into the 1988 massacre to shed light on this crime against humanity. There must be justice.

Women have paid an especially heavy price in the past two years. We must do more. We owe it to this great nation and people. We must support the desire of the Iranian people for regime change and the establishment of a secular government based on the separation of church and state, and gender equality.