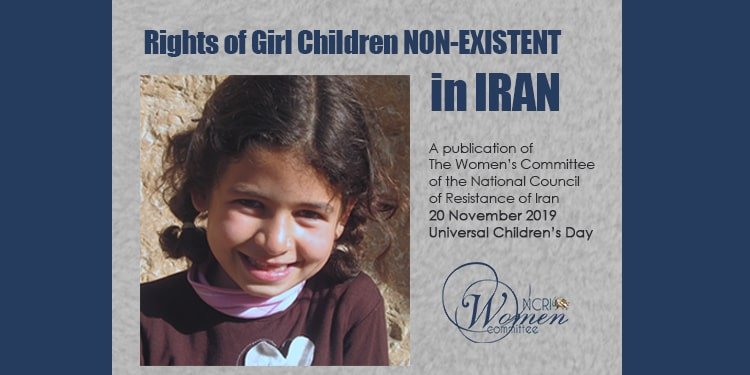 Rights of girl children are non-existent in Iran.

The 30th anniversary of the Convention on the Rights of the Child (CRC) is a good time to address the plight of girl children in Iran.

When the CRC was adopted in 1989, children were promised that their rights would be protected, promoted, and respected.

Iran is a State Party to the Convention on the Rights of the Child (CRC) (1994) but will not apply any provision “incompatible with Islamic laws or [domestic] legislation.”

The Iranian regime ratified the optional protocol on the Sale of Children, Child Prostitution and Child Pornography (2007) but implementation of the protocol is severely lacking.

Iran is one of only 30 countries that have not ratified UN Optional Protocol on Children in Armed Conflicts.

On February 4, 2016, the UN Committee on the Right of the Child condemned the Iranian regime for the rising number of child marriages, discrimination against girl children and laws that do not criminalize sexual relations with girl children.

Being a woman and a child, makes Iranian girl children the most vulnerable under the misogynist rule of the mullahs since the rights of girl children and women are neither protected nor promoted in Iran.

The bill on the rights of children has been stalled in the parliament for 10 years.

The bill to increase the age of marriage for girl children in Iran was rejected in December 2018 by the Legal and Judicial Committee of the parliament for containing “religious and social deficiencies” and for contradicting “the teachings of Islam.”

Civil and Penal codes do not clarify limits on physical punishment by parents. Fathers are not punished even for killing their daughters, because they are considered owner of their children’s blood.

The Iranian Law to Protect Children and Adolescents (2002) does not protest against physical abuse; no mention of sexual abuse.

A bill called the Law to Support Disadvantaged, Defenseless and Abandoned Children was passed by the Iranian regime’s Parliament on September 22, 2013, which sanctions marriage between the child and her guardian (stepfather), with the approval of a court.