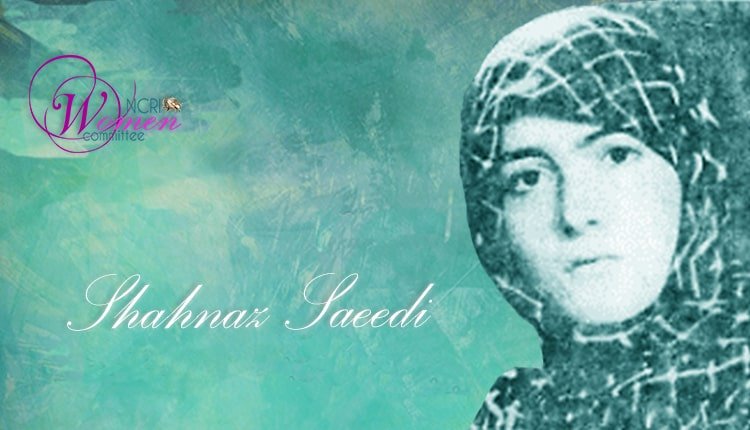 The walls are not made of just silent, lifeless bricks. Occasionally, great humans put their souls in the walls. The walls of the Prison of Borujerd in Lorestan hold the memory and name of Shahnaz Saeedi.

Born to a working family, Shahnaz Saeedi, 17, had the high spirits of the beautiful Lorestan Province. Her father worked at the cement factory and her mother was a housewife. Soon, she became familiar with the pain and hardships of the poor and low-income strata. This deeply impressed her freedom-loving spirit. So, she undertook enlightening activities at high school where she spoke about the causes of these misfortunes.

Every Friday, she would go on a mountain climbing trip with her friends so she could test her steadfastness and endurance with the mountains.

After the anti-monarchic revolution, Shahnaz Saeedi used to go to the deprived villages with several of her friends, and while helping the deprived villagers, they would inform them of the current situation of the society with the PMOI’s publications and statements. Her activities led her to be expelled from high school but these things could not stop her. With the same passion and adolescent mischief, she said, “Now, I am going to work full time in this path.”

All her friends and neighbors loved Shahnaz as she had a kind heart and a unique courage.

Perhaps it was strange for someone at this age, but locals had dubbed her as “courageous woman of Lorestan.”

It was on July 6, 1981, when 12 men and women armed guards surrounded and attacked the neighborhood, to arrest Shahnaz Saeedi. Her old father was also harassed and abused.

Shahnaz was transferred to the Prison of Borujerd.

This marked a second chapter in the life of Shahnaz Saeedi, a chapter studded by resistance against torture.

In the first month, she was held incommunicado in a dark and wet cell and was regularly tortured. She was whipped by cables, her hands and face were burnt, and she was starved for long periods.

To break her high spirits, the judge asked Shahnaz Saeedi during her trial, “If you are a revolutionary, then define the meaning of revelation for us.”

With an unprecedented courage, Shahnaz cries out in court, “Revelation is the just struggle of the Mujahedin-e Khalq and their endurance against you mercenaries.”

This outcry confirmed the death sentence for her, and Shahnaz knew this when she cried out. The night before her execution, she sang a beautiful anthem for her fellow cellmates.

According to her cellmates, they called her at night, raped her before execution, and in the middle of the night, she was handed over along with three other Mojahedin members, to the firing squad.

For psychological torture on her family, the prison authorities pressured her father to pay money and remittances to secure his daughter’s release. Despite lack of financial resources, her father prepared the money and made full payment to the prison officials, but they only gave him the blood-drenched body of his beloved daughter, Shahnaz Saeedi.

Two of her companions who were in the prison cell after Shahnaz Saeedi was executed, say that there were a lot of poems in the cell, words from martyrs, speeches of Massoud Rajavi and etc… that were handwritten on the plaster walls. Among all of them the following sentence was written on the night of her execution which forever remained the message of resistance and hope:

“I, Shahnaz Saeedi, will be executed tonight. Resist. Khomeini will go and the victory of the Mojahedin will come. Death to Khomeini, long live freedom, salute to Mojahedin, onward to a free and just society.”

The execution of Shahnaz Saeedi, on September 6, 1981, only two months after her arrest and on the occasion of the PMOI’s foundation anniversary, shows the cruelty of the misogynistic medieval regime ruling Iran. It also bespeaks of the persistence of Shahnaz Saeedi on her faith which was struggling for freedom.

And it was so that her sacrifice gave way to the courageous thousands, especially the courageous women of Lorestan, who have upheld the flag of struggle against the regime until it is overthrown.

On the Human Rights Day, who is hearing the cries of Iran’s youth?