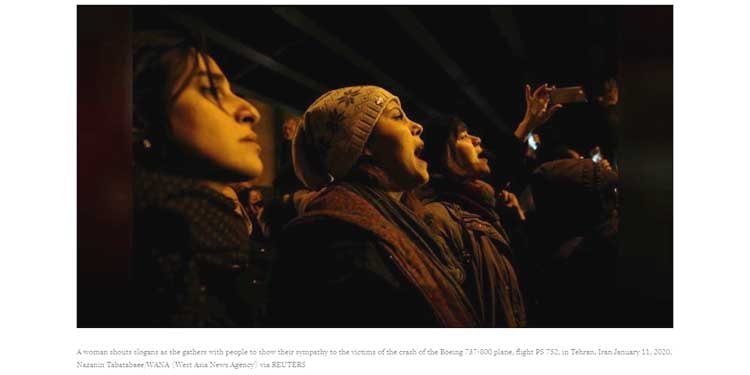 Tehran’s universities were scenes of a fourth day of student protests at noon on Tuesday, January 14, 2020. Female students played an active and leading role in the student protests.

Students of Tehran University’s School of Medicine gathered outside the university’s mosque on campus. They chanted, “Death to oppressor, whether it be the Shah or the (mullahs’ supreme) Leader,” “1,500 died in November,” “We will die, but will reclaim Iran,” and “Free all political prisoners.”

Day 4 of #IranProtests:
Students of Tehran University – Medical Sciences chant: "Death to the oppressor; whether the Shah or the [Supreme] Leader"#FreeIran2020 pic.twitter.com/gfO4qACTgw

Simultaneously, at Tehran’s Melli University (a.k.a. Beheshti), agents of the paramilitary Bassij posed as students and held an orchestrated gathering on the university’s campus. They were confronted by freedom-loving students and were forced to leave the scene.

January 14, 2019 – Meli University, Tehran, #Iran
Brave students chant: “be afraid, be afraid, we are all together” when they hear and encounter a counter-rally by pro-regime agents.#IranProtests2020 pic.twitter.com/R8H3J5Cc72

The students of School of Arts at Paris University of Karaj also held a gathering and chanted, “We are empty-handed, put away your batons.” Tuesday evening, January 14, 2020, on the fourth day of student protests, security forces and Bassij agents at Amir Kabir University attacked protesting students and an intense clash broke out. Security forces closed the gates on the students and detained them inside Amir Kabir and Tehran universities.

Students of Amir Kabir University sent message to the people and asked them to enter the university in whatever manner possible and help the students who have been surrounded inside the university and need help.

A number of students accompanied by other people also held a large gathering in Enqelab Avenue and chanted anti-regime slogans.

Mrs. Maryam Rajavi, President-elect of the National Council of Resistance of Iran, urged the United Nations Secretary General, the UN Security Council, the European Union and its member states, and all international organs supporting human rights to condemn the vicious suppression of protests by the people and students in Iran, to take immediate steps to free detainees, and to send an international delegation to visit prisons and prisoners arrested during the uprising.