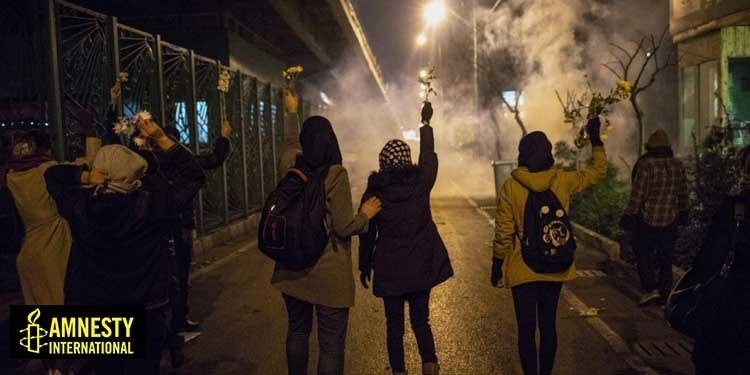 Amnesty International said Wednesday it had evidence that Iranian security forces used sexual violence against women in peaceful protests after Tehran admitted it accidentally shot down a Ukrainian airliner.

According to the report, published on January 15, 2020, “The organization received shocking allegations of sexual violence against at least one woman arbitrarily arrested by plainclothes security agents and detained for several hours in a police station. According to an informed source, while in detention, the woman was taken to a room where she was questioned by a security official who forced her to perform oral sex on him and attempted to rape her.”

“Iran’s security forces have once again carried out a reprehensible attack on the rights of Iranian people to peaceful expression and assembly and resorted to unlawful and brutal tactics,” said Philip Luther, Research and Advocacy Director for the Middle East and North Africa at Amnesty International.

Unlawful use of force against peaceful protesters

Amnesty International cited verified images and eyewitness testimonies indicating that “Iranian security forces used unlawful force against peaceful protesters who gathered across Iran following the authorities’ admission that they had shot down a Ukrainian passenger plane on 8 January.”

The rights group had evidence that “on 11 and 12 January security forces fired pointed pellets from air guns, usually used for hunting, at peaceful protesters causing bleeding and painful injuries. Security forces also used rubber bullets, tear gas and pepper spray to disperse protesters as well as kicking and punching them, beating them with batons and carrying out arbitrary arrests.”

One eyewitness, Mahsa from Tehran, described how security forces fired tear gas into the entrance hall of a metro station to stop people leaving to join the protest.

“There was so much tear gas… I was so mentally stressed and anxious that I initially didn’t even realize that I had been shot… The special forces of the police were firing pointed pellets at people. My coat is now filled with holes and I have bruises on my body… The streets were filled with armed plain-clothes agents firing shots into the air and threat(en)ing to shoot people… A member of the security forces chased me when they saw me filming the protest and that’s when I was shot in the leg with a pointed pellet… I’m in a lot of pain,” she said.

Iran's security forces are using brutal force against protesters. This is the latest violence in a series of bloody crackdowns against peaceful protesters in #Iran. pic.twitter.com/GN0jm2aOdz

“The situation in Iran right now is even more painful than death. They are killing us slowly; they are torturing us to death,” she said.

“It is appalling that Iran’s security forces have violently crushed peaceful vigils and protests by people demanding justice for the 176 passengers killed on the plane and expressing their anger at the Iranian authorities’ initial cover-up,” said Philip Luther.

It added that the Iranian security and intelligence forces were “maintaining a heavy presence in some hospitals raising fears they plan to arrest patients… Some medical clinics and hospitals in Tehran have turned away injured people, telling them that, if the security and intelligence forces find out they were among the protesters, they will be arrested.”

Amnesty International called on the Iranian authorities to “end the repression as a matter of urgency and ensure the security forces exercise maximum restraint and respect protesters’ rights to peaceful expression and assembly. Detainees must be protected from torture and other ill-treatment and all those who have been arbitrarily detained must be released.”

Flood-stricken woman in Sistan and Baluchestan: We’ve been forgotten!