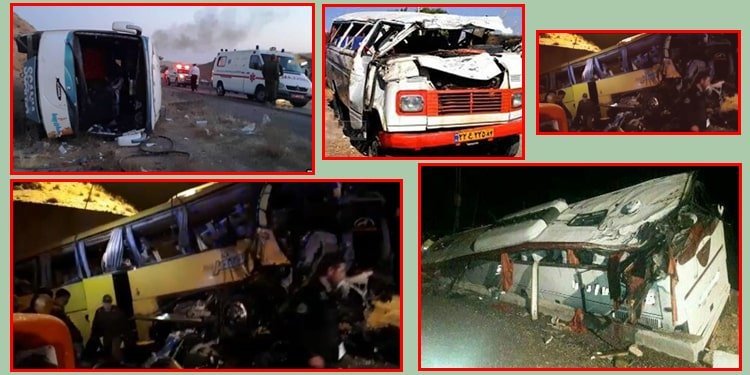 In four road accidents in Iran from January 9 to 20, 2020, 16 women including a pregnant woman have been killed.

The accident happened on Monday, January 20, 2020, when the bus was driving from Isfahan towards Ramsar. In addition to the two women, 13 other passengers including four women were wounded. (The state-run Jam-e Jam online, January 20, 2020)

This is the fourth incident in recent weeks where road accidents lead to deaths and injuries.

On January 15, 2020, seven people, including 5 women, got killed when a bus overturned on Mashhad-Bandar Abbas road.

The traffic police in the north of Kerman Province, Ali Akbar Nasiri, reported the deaths of 5 women in this road accident. 31 people were also injured. (The state-run ISNA news agency – January 15, 2020)

In other news, the derailment of a minibus on the Babol road left 7 women, including a 9-year-old girl, injured. (The state-run Rokna news agency – January 16, 2020)

On January 9, 2020, a passenger bus overturned on the Tehran-Gonbad road; 9 women including a pregnant woman got killed. (The official IRNA news agency – January 9, 2020)

In terms of road casualties, statistics show that Iran ranks 189th among 190 countries. Around 9 people are killed in every 10,000 cars in the world, while in Iran, this figure stands at 37, which is 4 times the world standard.

If we take an average of 23,000 to 27,000 deaths in traffic accidents during the year, with an average of 250,000 injuries, it seems as if a major earthquake occurs every year in Iran with this scale of deaths and injuries. The number of road casualties per year also equates to a full-blown war. (The official IRNA news agency – November 2018)

According to a news release from the official website of the regime’s parliament in June 2018, 17,000 Iranians are killed annually in road accidents.

In another development at a girls’ vocational school in Isfahan, 9 girl students were poisoned due to a technical failure in the heater’s chimney.

The girls who were poisoned with carbon monoxide gas at this school were between the ages of 16 and 17 years old. The students were transferred to hospitals in Isfahan. (The official IRNA news agency – January 15, 2020)