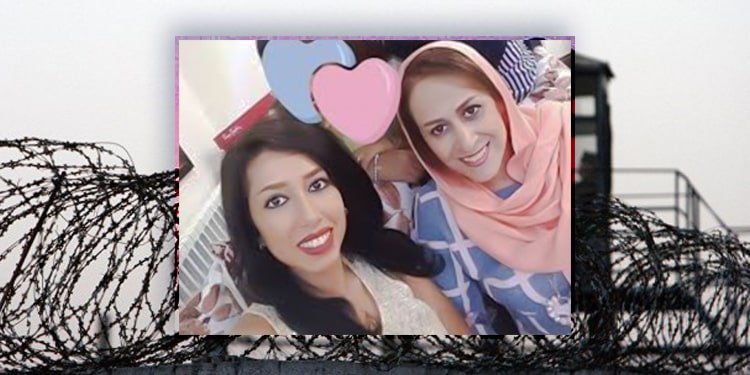 Saba Kord Afshari and her mother, Raheleh Ahmadi, who are both imprisoned in the Women’s Ward of Evin Prison are at risk of infection but Judiciary officials and prison authorities have refused to grant them leave despite the Coronavirus outbreak.

Many of the women political prisoners and imprisoned civil activists in Iranian prisons are still deprived of being sent on furlough.

The Coronavirus outbreak is spreading in Iranian prisons while they lack any form of basic hygienic resources and prisoners do not get gloves, disinfectants, detergents and face masks.

In another development, there was news that the women’s ward of the Prison of Zahedan has been evacuated since Wednesday, March 11, 2020 to house a group of infected prisoners who are packed there without receiving any medical care. It is not clear where the women prisoners have been transferred to.

According to reliable statistics of the Iranian Resistance, the number of Coronavirus fatalities in Iran has exceeded 8,800 in 201 cities across Iran. Based on reports from hospitals, local officials, and the main cemetery of Qom, the number of victims in this city is certainly more than 1,300. The number of victims has reached 900 in Gilan, 180 in Kurdistan, 420 in Golestan, 310 in Khuzestan, 200 in the Central Province, and 60 in Kerman.

Medical services are monopolized in Iran by the IRGC and Khamenei’s Office. The unfair distribution of services, and the refusal to provide assistance to the people by financial centers such as the “Headquarters for Execution of Imam Khomeini’s Order,” Astan-e Quds-e Razavi in Mashhad, the Mostaz’afan Foundation, the Martyrs’ Foundation and others have led to the astounding rise in the number of victims.

In the absence of minimum government support, many people, especially workers and deprived sectors have to go to work in contaminated environments to make ends meet.

Five health ministers, including those during Mir Hossein Moussavi, Akbar Hashemi Rafsanjani, Mohammad Khatami, and Mahmoud Ahmadinejad presidencies, joined 17 medical scientists on March 19 in writing to Rouhani and warning that one month after the Coronavirus outbreak, “the disease’s trend and its consequences are rising exponentially and at no time have seen a downturn… If this trend is not controlled and no effective solution is provided, the rise in the fatalities and damages is certain.”