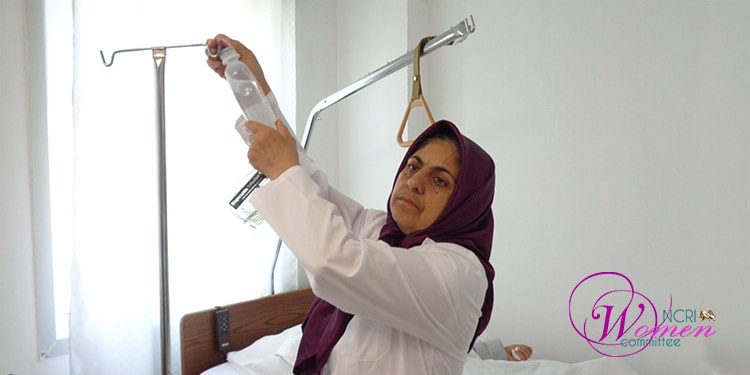 These days, when the world is gripped by the coronavirus, nurses are known as kind, sincere, always active, selfless and reckless figures who risk their lives for the health and safety of every sick person. In the human world, such values take on a different quality and orientation when it comes to serving men and women who have dedicated their lives to a nationwide resistance.

Maryam Nojavan, the friendly and familiar face we are talking about, has been known for many years in the Iranian Resistance for her spirit of sacrifice and good heart.

She was born in 1964 in the city of Ahar, the province of East Azarbaijan in northwestern Iran. There are three sisters and three brothers in their family, of which Maryam is the third sister. She has a 30-year-old daughter named Mina.

Maryam describes the period of the anti-monarchical revolution in Iran as follows: “In those days, I enjoyed seeing the devotion, sincerity and empathy among the people. When clashes or demonstrations broke out, they opened their doors to protesters and sheltered them.”

Initial choice and overcoming the obstacles

When Maryam was only 16, she became acquainted with the People’s Mojahedin Organization of Iran (PMOI/MEK) through her brother. Then in September 1979, she became a full time supporter of the PMOI/MEK while continuing her studies. But after the bloody suppression of Mojahedin supporters by the Khomeini regime in 1981, she lost her connection with the Mojahedin.

In May 1990, Maryam left the country to reach the PMOI/MEK bases outside Iran. She went to Turkey through the border of Urmia and from there she reached the city of Ashraf.

Maryam Nojavan describes the conditions of her departure as follows:

“Although I was seven months pregnant when I was ready to leave the country, I did not make my departure conditional on the birth of my child. I had tried so hard to find a clue about the Mojahedin that I was not willing to exchange it for anything.

“It was really hard to cross the border through impassable roads, riding on horseback and sometimes on foot. I did not think my baby would survive. But to my surprise, he was born shortly after we arrived at our destination.

“On the other hand, leaving the country was not an easy task for a woman like me. The dominant culture of the society and especially the view that existed regarding women, did not allow them for women to have a sense of independence and to make serious decisions in life. That being said, it never defined who I was as I was able to overcome these societal pressures and find my own personal sense of purpose.

Joining the medical centers of the Iranian Resistance

Maryam Nojavan, who made her path, describes another part of her life as working in Ashraf Medical Centre. “For me as a nurse, the most beautiful and best scene is when my patients have fully recovered after a serious illness,” she says.

With a kind look and calmness that evokes resilience and strength, Maryam describes the years of endurance in Ashraf as follows:

“In Ashraf and then Liberty, we spent 14 years under siege and medically in difficult conditions. On April 7, the scene of the injury of many of our sisters, including Saba Haft Baradaran, wounded while bleeding from her thigh was very painful. The doctors and the medical team worked to save Saba and the others, but we did not even have an oxygen capsule. All the facilities were seized by the Iraqi mercenaries who were stationed in the clinic. Saba was taken to the hospital with our great effort, but eventually succumbed to her wounds.”

Despite the grief of losing so many of her friends over the years, Maryam Nojavan has not lost hope for Iran. Many of her colleagues and friends continue to work as medical professionals within the country with limited resources and funding, yet are still able to assess and assist a range of patients dealing with a variety of illnesses and diseases.

It is that altruism of her countrymen and women that has given her the hope to believe in the future. A hope for Iran’s liberation from the evils of religious dictatorship. A hope for women’s equality and of a tomorrow which sorrow will give way to the happiness and prosperity of the people. A tomorrow that is the embodiment of the immeasurable sacrifices of the men and women of Iran, where the lives and health of its citizens will be of the highest priority. A new dawn where there is sustainable funding for scientists and health professionals to continue the work that they do for the betterment of the country as a whole. And that day is within reach. That change is near.