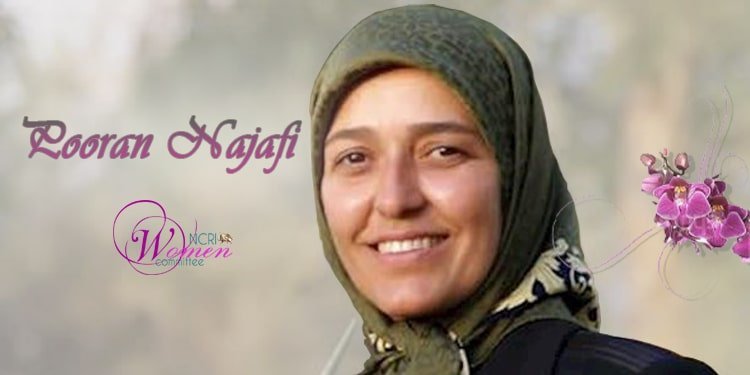 A story of endurance and love: Life of Pouran Najafi

Pouran Najafi was born in 1963 in the city of Rasht in Iran. In 1979 when the anti-monarchy revolution took place, she was only 15 years old. She entered the political scene at 17 years old, while a student at the Conservatory of Mechanical Engineering.

Pouran was imprisoned for 5 years in the regime’s medieval prisons for being a sympathizer of the People’s Mojahedin Organization of Iran (PMOI/MEK) but upon her release in 1987, she joined the resistance more determined than ever.

Pouran Najafi who was an exemplary brave Iranian woman was killed on February 9, 2013 during a missile attack on Camp Liberty by the mullahs’ mercenaries in Iraq.

In her book entitled, “Flight of Enchained Inmates,” Pouran wrote: “Being a woman and a political activist is something that cannot be tolerated by the mullahs…. It is true that women face twice as much oppression as men do under this regime, but I have not been able to find the appropriate words to accurately express the extent of what women and girls go through under the clerical regime.”

In her book, Pouran Najafi sheds light on the extent of the repression of girls and women involved in political activities. About two and a half years of her political activity after the 1979 revolution, she wrote, “When I used to sell magazines, they (the regime’s club wielders and thugs) used to try to pull my scarf off and insult me on a regular basis. I always wondered why they are so hysteric about girls who were politically active and why they could not tolerate PMOI supporters?”

Pouran Najafi was arrested by the Revolutionary Guard Corps (IRGC) in August 1981 and was subjected to the most severe physical and psychological tortures. During her trial, the religious judge told her, “You are condemned to death.” Pouran roared, “How could people who claim to defend Islam and the Revolution beat defenseless women and girls in the streets? Is this your Islam and Sharia Law?” Upon hearing this, the religious judge took off his shoe and struck it on her head and shouted, “She has to be executed.”

Prison authorities, guards and personnel wanted to break the resistance of the prisoners and force them into surrender at any cost.

Pouran in this regard wrote, “We were given 10 minutes a day to go to toilet, take a bath and wash our clothes. They used every excuse to punish us. They cut the toilet time down to 2 minutes per day and anyone who was not able to finish in the allowed time the next person was punished. Occasionally, they forbid bathing for us. Due to lack of hygiene, prisoners suffered from various skin diseases. The female guards used to say, ‘We make the conditions so tough for you but still you do not comply.’ In their view, compliance was to give in and surrender.”

Pouran’s death sentence was commuted to five years’ imprisonment due to the political atmosphere at the time. She served her sentence in Rasht, Roudbar, Evin and Ghezel Hesar prisons and was finally released in August 1986.

Pouran managed to write about her experiences in a book entitled, “Flight of Enchained Inmates.”

This brilliant book depicts but a small part of the misogynist behavior of the mullahs towards women in their medieval prisons.

Immediately after her release, Pouran joined the PMOI in Ashraf.

During her 25 years of uninterrupted struggle, she demonstrated a new image of resilient Iranian women: A woman who had been involved in the struggle against dictatorship since her teens and had devoted all her life and energy to the cause of her people’s liberation and happiness of Iranian women.

Pouran Najafi spent 25 years in camps Ashraf and Liberty during which she was an example of strength and confidence against all adversities. The ten-year endurance in Ashraf and Liberty under various inhumane blockades and horrendous conditions could not wipe the smile off her face.

On February 9, 2013, she was killed in a rocket attack on Camp Liberty perpetrated by the Iranian regime’s mercenaries in Iraq.