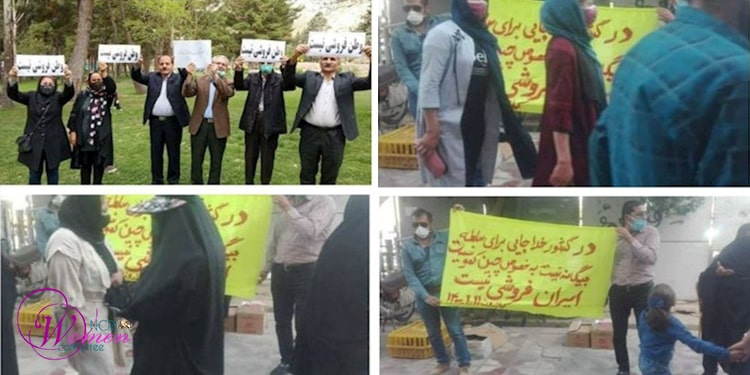 Iranians continued their protests against the clerical regime’s treacherous 25-year contract with China which auctions Iranian people’s wealth and assets.

On Wednesday, March 31, 2021, more Iranian women and men took to the streets to show their disapproval of the regime’s conduct. They held placards which read: “Iran is not for sale.”

Again, women played an active role in all these protests.

In Tehran, a group of women held a protest gathering outside the mullahs’ parliament despite heavy presence of security forces and plainclothes agents.

Security forces which included non-Iranian mercenaries, attacked the protesters and beat them up with batons. They had no mercy. They brutalized the elderly and young children.

The security forces beat a young girl around 10-12 years of age who had taken part in the protest with her mother. They wanted to hit the mother in the head when she charged to take her daughter away from the clutches of the troops, but other people in scene prevented it.

The repressive forces also beat a large number of women, taking away or breaking their mobile phones.

The State Security Force packed three vans and one mini bus with those arrested and took them away.

Also in Mashhad, the second largest Iranian city, a large number of people held a protest in Abdul-Motalleb Intersection.