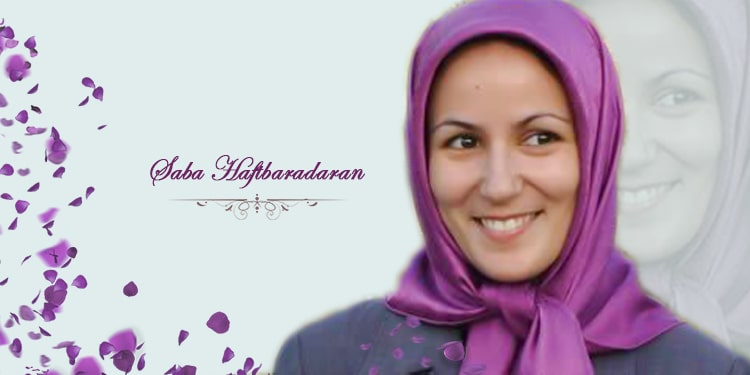 Saba Haftbaradaran was born in a Tehran prison in 1982. Her father and mother had been imprisoned for their opposition to the mullahs’ regime.

Saba was 1.5 years old when she came out of prison with her mother’s release.

After both her parents were released from prison, they left the country and joined the Resistance in the border region.

She grew up in Ashraf, Iraq, and was sent abroad to Germany when the Gulf war began in 1990 as children were in danger of being killed in the massive bombardments of Iraq.

Saba, however, did not forget the suffering of her people. She said, “I cannot enjoy having the best life and education in Germany, when I hear every day, shocking news of women and children suffering in my homeland.”

With the beginning of another war in Iraq in 2003, another testing time began for Saba Haftbaradaran and for all the young women and men like her who were being exposed to the difficulties of struggle against the mullahs’ regime in a strange land.

Of course, this generation remained steadfast in the stormy events of the post-war Iraq and under attacks of the Iraqi agents of the Iranian regime.

Saba Haftbaradaran was one of the 36 members of the PMOI/MEK who laid down their lives during an unequal confrontation in Ashraf, on April 8, 2011.

Saba Haftbaradaran was 29 when she was shot in the thigh and started bleeding heavily.

The Iraqi forces impeded her treatment by delaying her transfer to hospital. Even then, they did not allow Saba to receive blood from the blood bank, a measure that led to her eventual loss of life.

Saba’s last words were: “We will remain steadfast to the last breath.”

And with those words and her courageous endurance, she turned into the symbol of the epic resistance of April 8, 2011, in Ashraf.