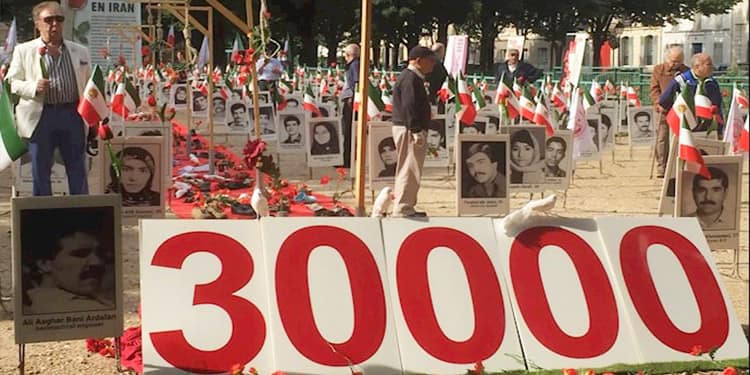 Hamid Noury, a perpetrator of the 1988 massacre, tried for crimes against humanity

A Swedish court is investigating the 1988 massacre, this crime against humanity, through the trial of Hamid Noury, a perpetrator of the 1988 massacre. This is the first time a person has been held accountable in court for this chapter in Iranian history.

The massacre of 30,000 political prisoners in Iran in 1988 is an unpunished crime. Many of those executed during this horrific genocide were young women. Most of them supported the People’s Mojahedin Organization of Iran (PMOI/MEK), the main opposition to the ruling mullahs.

The first day of the trial of Hamid Noury, a perpetrator of the 1988 massacre, was held on August 10, 2021, in Stockholm, Sweden. He is on trial for war crimes and murders in the 1980s. The trial began just days after the taking office of Ebrahim Ra’isi, the mullahs’ new president and one of the leading members of the Death Commissions in the massacre of 30,000 political prisoners in 1988.

Hamid Noury was one of the operatives who selected prisoners lined up in the Corridor of Death in Gohardasht Prison. He determined which prisoners should appear before members of the Death Commission. He took prisoners to death row and organized executions.

Born on April 29, 1961, Hamid Noury was known among political prisoners as Hamid Abbasi. He was a member of the Revolutionary Guard Corps (IRGC) hired by the Judiciary and worked as a prison official.

Hamid Noury worked as an assistant prosecutor in Evin and Gohardasht prisons. He worked for a long time under Mohammad Moghiseh, the prison’s associate prosecutor and one of the perpetrators of the executions during the massacre of political prisoners in 1988.

During the summer of 1988, Hamid Noury was an active member of the Death Commission in Gohardasht Prison.

Noury was arrested on November 9, 2019, at Stockholm Airport. The plaintiffs and their lawyers say that Hamid Noury was identified as the assistant prosecutor of Gohardasht prison and one of the eight Death Commission members in this prison during the mass executions of political prisoners. For this reason, he has been arrested by a Swedish court on several charges, including war crimes, crimes against humanity, torture, and complicity in the ongoing crime of not returning bodies.

During three court sessions beginning August 10, 2021, Hamid Noury was brought to the court every day, handcuffed and foot cuffed, and placed next to his lawyers.

On the second day of the trial, the prosecutor read Khomeini’s 231-word fatwa, based on which Khomeini had ordered the massacre of all PMOI/MEK prisoners. Referring to several articles of the Fourth Geneva Convention, including Articles 3 and 57 of the Convention, the prosecutor said that the execution of PMOI/MEK prisoners under this fatwa was a grave violation of the Geneva Convention.

As for the murder charge, Swedish prosecutors said Noury is suspected of “intentionally killing, together with other perpetrators, a large number of prisoners who sympathized with various left-wing groups and who were regarded as apostates,” wrote the Washington Post, on August 10, 2021.

Focus on Raisi, as a perpetrator of the 1988 massacre

“The trial is likely to focus unwelcome attention on Iran’s hardline President Ebrahim Raisi, who was inaugurated last week and who is under U.S. sanctions over a past that includes what Washington and activists say was his involvement as one of four judges who oversaw the 1988 killings,” reported Reuters on August 10, 2021.

Ebrahim Ra’isi participated in the Death Commission as a prosecutor in 1988. He carried out all of Khomeini’s orders in the corridors of death based on his 231-word fatwa to execute on the spot all political prisoners who adhered to their beliefs.

A prisoner testifies about Hamid Noury

Asghar Mehdizadeh, one of the eyewitnesses of the 1988 massacre, said about the role of Hamid Noury: “It was August 4, 1988. I was sitting in the corridor of death. A guard called me. We went into the big hall where they carried out the executions, the hall of death. The guard untied my blindfold and gave me a mocking smile. Suddenly I saw 12 people standing on stools with ropes around their necks. Some Mojahedin bodies were also in front of them on the floor. My eyes went black, and I said, ‘God, what is going on here?’ Suddenly, the men [on the stools] chanted, ‘Death to Khomeini, hail to Rajavi, long live freedom.’

The Revolutionary Guards were astonished.

“Nasserian (a torturer) shouted at Davood Lashkari, Hamid Abbasi (Noury), and other Revolutionary Guards and said: ‘What are you waiting for?’ Then they went towards the men, kicked the stools [from underneath their legs,] and made them fall. When they reached the fourth or fifth man, they chanted louder and said, ‘Hail to the Mojahedin, God is Great,’ and jumped on their own. They flew away. I lost my balance and no longer understood what happened.” (The Alhadath-TV, August 10, 2021)

PMOI/MEK supporters, families of the 1988 massacre victims rally in Stockholm

Simultaneous with Hamid Noury’s court hearings, a large group of Mojahedin supporters held a rally and a photo exhibition of the victims of the 1988 massacre outside the courthouse in Stockholm from August 19 to 21. Some of the families of the victims of the 1988 massacre also participated. Mothers, wives, sisters, and children of the victims held the photographs of their loved ones, made speeches, and exposed the crimes of the clerical regime in the gathering. They urged the international community, particularly the United Nations, to end the impunity of the Iranian regime officials. They further urged them to establish an international tribunal to prosecute Ali Khamenei, Ebrahim Raisi, and other masterminds and perpetrators of the 1988 massacre.

Sima Mirzaei is the sister of 7 martyrs from the Mirzaei family. Her two brothers, Hossein and Mostafa, and her two sisters, Khadijeh and Massoumeh, and her sister-in-law, Mahnaz Yousefi Loyeh, were executed during the 1988 massacre. She was one of the bereaved women who addressed the Iranians’ rally in Stockholm.

Mother Hamdam, the mother of Sassan Saeedpour, executed on October 29, 1981, also spoke at the rally. She never received the body of her son.

Mother Hamdam said that after her son was arrested, the clerical regime announced in the newspapers that he had been killed in street clashes. After three months, however, it became clear that her son had been killed under torture. This mother had nothing from her son, not even a single line of his will!

“These days are the days of mothers, sisters, fathers, and wives who have lost their loved ones,” said Khosrow Shahriari, a poet, writer, and theatre director, in his remarks to the rally. He added, “They have received bags of clothes instead of their loved ones, and they are still unaware of the whereabouts of their loved ones’ graves.”