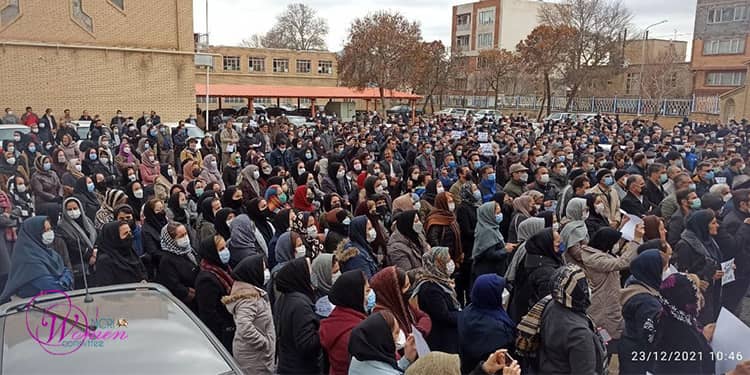 Teachers protest the mullahs’ ranking plan in 100 cities across Iran

Iranian teachers held widespread protests and strikes in cities across the country on Thursday, December 23, 2021. Working and retired teachers are carrying strikes in protest of the Iranian parliament’s adoption of a formalistic ranking plan that does not provide for their demands.

Freedom of imprisoned teachers and the adjustment of the retired teachers’ pensions are also among the main demands of the protesting teachers.

Women have participated widely and actively in these nationwide protests, which had been called for in advance.  Iranian teachers have taught an unforgettable lesson to the clerical regime by taking to the streets.

Security forces have a heavy presence in Tehran, Mashhad, and Shiraz to prevent the spread of teachers’ protests to the ranking plan. The teachers’ gathering in Shiraz is massive.

Security forces in Khorramshahr tried to disperse the teachers’ gathering. Still, the teachers resisted and confronted them with chants of “Teachers, cry out and demand your rights,” and marched on to the Governor’s Office.

The Special Security Unit’s forces attacked the protesting teachers with pepper gas in Shiraz. Angry teachers clashed with the security forces and confronted them. They are still present in the streets around the Department of Education.

The chants in these protest gatherings include, “Teachers rise to eliminate discrimination,” “Free political prisoners,” “Teachers die but won’t accept humiliation,” and “Free education is a right of Iranian students.”

A female teacher held a placard that read, “I am a teacher; I have come to teach my students how to gain their rights.”

After more than a decade, the clerical regime has not finalized and implemented the Teachers’ Ranking Plan. Iranian teachers have had to take to the streets and hold protest sit-ins and strikes to achieve their rights.

In reaction to the teachers’ continued protests in recent months and in a bid to quell them, the regime’s parliament adopted a formalistic ranking plan, which does not have enough budget to respond to the teachers’ needs.

The mullahs’ parliament (Majlis) passed the Teachers’ Ranking Plan last Wednesday, December 15, in a bid to shut their voices. Iranian teachers call out the regime, describing the bill as deceitful and unacceptable.

Raisi’s government has warned that it will not implement the flawed plan in the current Persian Year until March 21, 2022.

According to the bill, 25 trillion Tomans will be allocated to around 734,000 teachers across Iran in the coming Persian year, starting in March 2022. The plan, however, does not cover the tens of thousands of tutors who work on unofficial contracts because the education ministry refuses to hire them despite having passed its test.

Moreover, Hossein Arab Assadi, the deputy of the Employment Affairs Organization, said, “There’s no funding to implement the law in the current year and the government has no credit for the year 1400 [March 2021-March 2022].”

One of the semi-official websites wrote, “Teachers are currently considered government employees. When teachers take to the streets and stage protests, they would be followed by other social sectors, and what would happen next? Inefficacy and mismanagement of lawmakers and policymakers have reached a point where a middle-class cultural sector (i.e., teachers) is taking to the streets and chanting to gain their rights. It would be too simplistic to conceive of the teachers’ protests as demand for higher salaries.” (The state-run didarnews.com, December 14, 2021)