Charges: Waging war on God (Moharebeh) through membership in the People’s Mojahedin Organization of Iran (PMOI/MEK)

Imprisoned since 2009, without a single day of leave

Maryam was abruptly moved from the women’s ward of Evin to the Prison of Semnan on March 9, 2021

Maryam Akbari Monfared is deprived of having a phone card.

She can contact her family and children only in the presence of a prison agent.

Abdolreza and Roghieh Akbari Monfared were executed during the 1988 massacre.

Another two of her brothers were executed in the 1980s.

Our homeland, Iran, is a large and rich country with a rich and proud history and culture that can never be recognized by the dark rule of the...

Excerpts from the declaration of 38 mothers of the martyrs and relatives of the November 2019 victims in support of the workers’ nationwide strikes: Our beloved children stepped...

Iranian women’s pioneering role in the November 2019 uprising. One of the most stunning moments of Iran’s contemporary history emerged on November 15, 2019, reflecting the volatile state...

Iran: One year after the uprising in November 2019 One of the most stunning moments of Iran’s contemporary history emerged on November 15, 2019. The protests took shape... 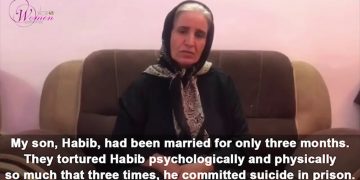 The mother of three young Iran protesters has gone public to save the lives of her sons, after the Iranian Judiciary handed down unfair sentences for them for...