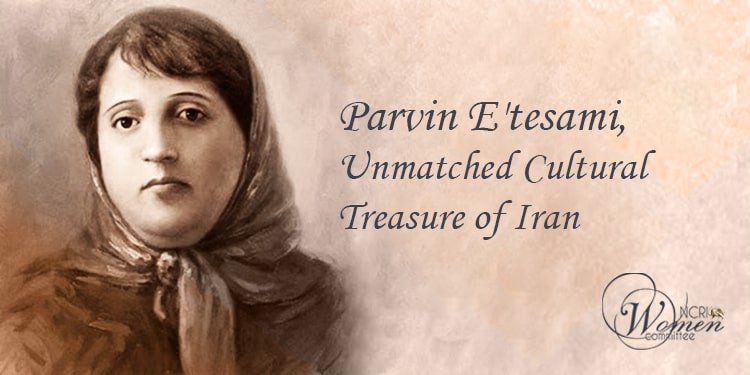 She began composing poetry at the age of 8. By the age of 11, she had already mastered the poetry styles of renowned Iranian poets such as Sanai, Saadi, Rumi, Khayyam, Hafez, and Naser Khusraw.

Parvin E’tesami (Rakhshanda) was born in Tabriz in 1907. Her mother was a cultured woman and the daughter of a Qajar-era poet. Parvin’s father, Yusuf E’tesam-al-Molk, was a prominent scholar who was proficient in Arabic literature, as well as French and Turkish, and well-versed in the principles of logic and wisdom. As the chief editor of the Bahar Journal, he produced some 40 volumes of literary translations. He was the first intellectual to translate Victor Hugo’s Les Misérables.

Parvin’s upbringing was remarkable, given that her parents were highly educated and enlightened. They encouraged Parvin, nurturing her creativity and talent.

From childhood, Parvin E’tesami had a firm grasp of both Arabic and English, thanks to her father’s knowledge. By the time she was 14, she had matured her craft and was composing meaningful poetry. Two of her father’s close friends – renowned Iranian poets and linguists Ali-Akbar Dehkhoda and Mohammad-Taqi Bahar (Malek osh-Sho’arā) – closely monitored Parvin’s progress as a poet during their frequent visits to the family home.

At the age of 18, Parvin E’tesami began studying at the American Girls College in Tehran, where she also taught English. For her high school graduation ceremony from the Iran Bethel School, she composed the poem, “A Twig of a Wish,” which touched on women’s struggles through historical, social, philosophical, and anthropological themes. This work clearly demonstrated Parvin’s depth of knowledge and showed her to be a woman ahead of her time.

Parvin believed that the true foundation of any stable society lay in its ability to educate and empower women.

Her poems illustrated the hardships of the poverty-stricken while exposing those who used religion as a political tool.

With her father’s assistance, Parvin E’tesami published her first book of poetry (Diwan) in 1935. In 1936, the Ministry of Culture and Science awarded Parvin E’tesami the Category 3 Science Award. She was invited by Reza Khan to tutor his wife, the queen of the new Pahlavi court, but refused the post.

In 1938-39, Parvin E’tesami worked as the librarian at Danesh-Saraay-e ‘Aali library – modern-day Tarbiat Moallem University of Tehran. However, her courageous and rebellious spirit propelled her to quit her job so she could dedicate herself to composing poetry that condemned dictatorship and hypocrisy. One such poem is The orphan’s tear:

From every street and roof rose joyous shouts;

The king that day was passing through the town

An orphan boy amidst this speaks his doubts,

What is that sparkle that’s atop his crown?

Someone replied: that’s not for us to know,

A crone approached, her twisted back bent low,

She said: that’s your heart’s blood and my eye’s tear! ….

Upon the orphan’s tears keep fixed your gaze.

‘Til you see from where comes the jewel’s glow.

Parvin’s poetry expressed the pain of poverty and exploitation and called on the masses to revolt against transgressors.

Her poetry articulated the social discord of her time and posited that the eternal war between good and evil is a product of the human mind.

Parvin E’tesami’s poems bared her soul, which was wounded from deceit, deception, and exploitation of religion.

Parvin E’tesami married at 28 and was divorced 2.5 months later. After her divorce, Parvin’s poetry reflected a new intellectual maturity and began to expose misogyny.

Formerly a woman in Iran was almost non-Iranian.
All she did was struggle through dark and distressing days.
Her life she spent in isolation; she died in isolation.
What was she then if not a prisoner?
None ever lived centuries in darkness like her.
None was sacrificed on the altar of hypocrisy like her.
In the courts of justice no witness defended her.
To the school of learning she was not admitted.
All her life her cries for justice remained unheeded.
This oppression occurred publicly; it was no secret.

Parvin E’tesami’s poetry and intellect are unmatched in the history of Iranian literature. As a national treasure, her poetry cannot be summarized nor marginalized. Her valuable works are preserved through more than 5,000 poems in the anthology of Qasida and Ghazal.

The mullahs’ regime has never acknowledged the importance of Parvin’s poetry. Instead, the regime tried to detract from her art, calling her just a “poetess” because she had written so eloquently about oppressors and hypocrites.