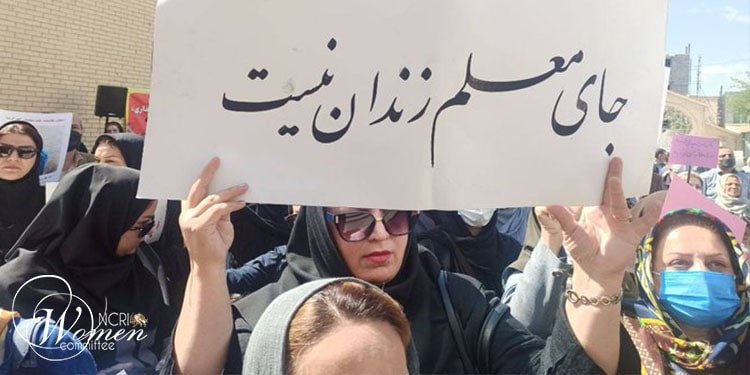 Teachers’ demonstrations in 38 cities in 20 Iranian provinces. Teachers held demonstrations in 20 provinces and at least 38 Iranian cities despite the clerical regime’s strict security measures.
On Thursday, May 12, 2022, Iranian teachers and educators took to the streets to protest the non-fulfillment of their demands, including ranking and adjusting their pensions. Another demand in the teachers’ demonstrations was the release of imprisoned teachers.
The demonstrations took place in front of the parliament in Tehran and in front of education departments in other cities. The massive teachers’ demonstration on Thursday, May 12, is the second nationwide protest by teachers and educators in a one-month time span.
In Isfahan, security forces occupied the teachers’ gathering place and prevented their gathering. Police forcibly threw teachers on the sidewalk.
In Ardabil, the State Security forces attacked a gathering of teachers. In Ahwaz, teachers resisting the arrest of other colleagues were beaten by security forces.

The active role of women in the teachers’ demonstrations

Fearing the spread of the teachers’ protest movement, the regime arrested dozens of teachers and educators weeks ago and threatened many teachers.
In this demonstration, the regime’s intelligence and security services, including the national Cyberspace Monitoring Center, threatened to summon the teachers if they participated in demonstrations or in teachers’ groups on social media. Despite all the threats and arrests, the teachers did not give up their demands.
Security forces arrested a number of teachers in Tehran, Ahvaz, and Yasuj.

Four teachers were arrested in Yasuj, the capital of Kohgiluyeh and Boyer-Ahmad Province, southwestern Iran. The arrested teachers include two women, Ms. Poozesh and Ms. Aghaii. The arrested teachers have been transferred to the detention center of the Intelligence and Security Police.
In Tehran, Ms. Massoumeh Dehghan was among those arrested. Massoumeh Dehghan is the wife of Abdolfattah Soltani, a lawyer, and human rights activist.
Ms. Maryam Rajavi, President-elect of the Iranian Resistance, greeted the teachers who protested despite the repressive measures, saying that this shows their will to achieve freedom and justice.