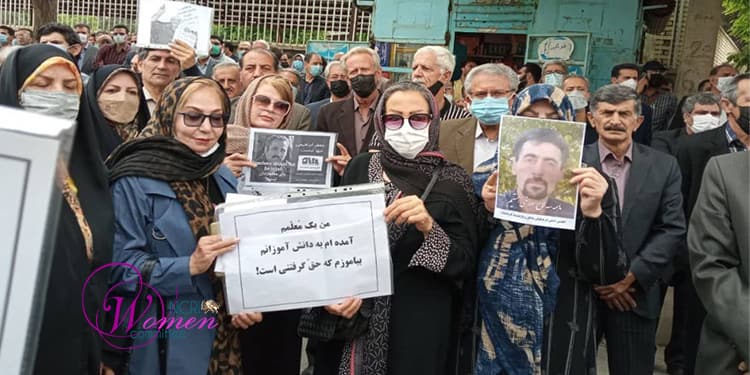 On International Labor Day, May 1, 2022, Iranian educators and teachers rose up to demand the release of imprisoned teachers. They chanted the slogan, “Free the imprisoned teacher,” throughout Iran. The nationwide protest took place in 55 cities and 21 provinces of Iran.

Women teachers played an active role in all the protests by Iranian educators and teachers. One of these brave women gave a passionate speech in Yasuj to support workers, children, and students. Addressing the regime officials, she said that the teachers’ protests had been going on for a year, but they had received no answer to their demands. She denounced the officials who provided a luxurious life for their children but have plunged the entire nation into poverty and deprivation.

In light of the intense security atmosphere in Tehran, the teachers could not hold their protest rally in front of the parliament. Instead, they went to a park. At this gathering, one of the women teachers gave a speech and announced the names of the arrested teachers in other cities.

In many cities, including Marivan, security forces were widely present in front of the education departments.
The Telegram channel of the Coordination Council of Iranian Teachers’ Associations reported that security forces in Bushehr attacked a peaceful gathering of teachers and arrested and beat a number of them.

The Workers’ Free Union of Iran also announced that on the eve of International Workers’ Day, four teachers, including Fatemeh Zandkarimi, a teacher and union activist in Sanandaj, were summoned to the Sanandaj Intelligence Office. These teachers were interrogated about the nationwide rally on Sunday, May 1.

“Political prisoners must be freed;”

“Imprisoned teachers must be freed;”

“Illiterate Raisi, this is the last warning, the teachers’ movement is ready to revolt;”

“Liar Raisi, what happened to your empty promises;”

“Our enemy is here (state), they lie, saying its America;”

“If one embezzlement (referring to state backed plundering) is prevented, our problems would be solved.”

In this nationwide protest on Labor Day, Iranian educators and teachers reaffirmed their rightful demands, none of which have been met so far. The Iranian educators and teachers want the full implementation of the Civil Services Management Law. They say that only after implementing this law and the real ranking plan and accurate adjustments should the salaries of every retired and employed teacher reach above the poverty line. The same is true for newly hired and informal teachers. The end-of-service bonuses for retirees of 2021 and the arrears of casual teachers must be paid. Temporary teachers should also be formally employed.

While strongly supporting Iranian workers’ demands, Iranian educators and teachers also call for an end to the policy of repression and intimidation, the closure of labor activists’ cases, and the release of labor prisoners.