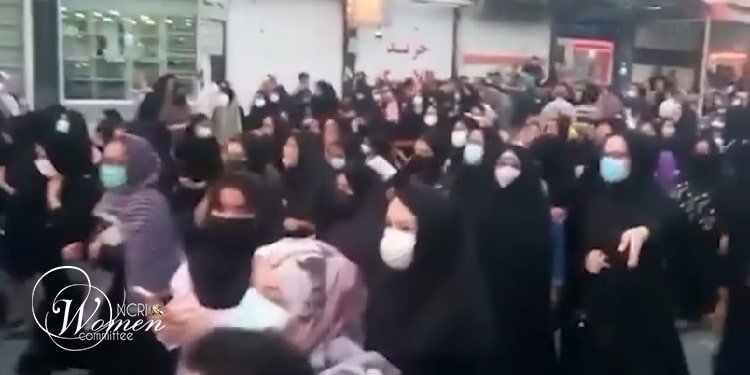 Thousands of people of Khorramshahr, including throngs of women, have taken to the streets of Khorramshahr chanting anti-regime slogans this evening, May 26, 2022.

The protesters chant slogans in support of the people of Abadan who lost dozens of their loved ones when a half-constructed 10-story building collapsed on May 23, 2022.

Khorramshahr is the main port city in Khuzestan, located 10 kilometers north of Abadan.

Last night thousands of the people of Abadan took to the streets and chanted slogans against regime officials who have failed to respond to the disaster after 48 hours.

They chanted “death to the dictator” and called on Raisi to let go of the country. They cried out, “the mullahs must get lost.” The Abadan protesters cried out, “Our enemy is right here! It’s a lie when they say it’s the United States.”

Instead of sending first responders to save those stuck under the rubbles, the regime has dispatched anti-riot forces to quell the protests of the bereaved families of the victims and the angry people of Abadan.

Locals try to save the people still alive under the rubbles with empty hands and using pots and pans.

As this news is being published, the people of Khorramshahr and Behbahan in Khuzestan, Bandar Abbas, the capital of Hormozgan Province, and Shahinshahr in Isfahan Province are demonstrating in the streets.

Women of Khorramshahr set a role model for all

The women of Khorramshahr chant “death to the dictator” and call for the downfall of the regime and its corrupt officials. Women’s cries in the protests are loud, clear, and predominant.

The NCRI President-elect Maryam Rajavi sent a message to the people of Khuzestan and Iran:

Hail to the people and women of Khorramshahr who have risen in support of the people of Abadan and its protests. Hail to Bandar Abbas who support Abadan with chants of “death to the dictator.” The enemy of all our people is the predatory clerical regime that has occupied Iran. The tragedy in Abadan is a manifestation of the 43-year rule of the clerical regime, which has brought the Iranian people nothing but crimes, corruption, and theft.

The people of Khorramshahr cry out, “I’ll kill whoever killed my brother,” “the people of Khuzestan will die but won’t accept humiliation,” and “Raisi, shame on you, let go of the country.” They reflect the desires of all Iranians to overthrow the mullahs’ ominous rule.