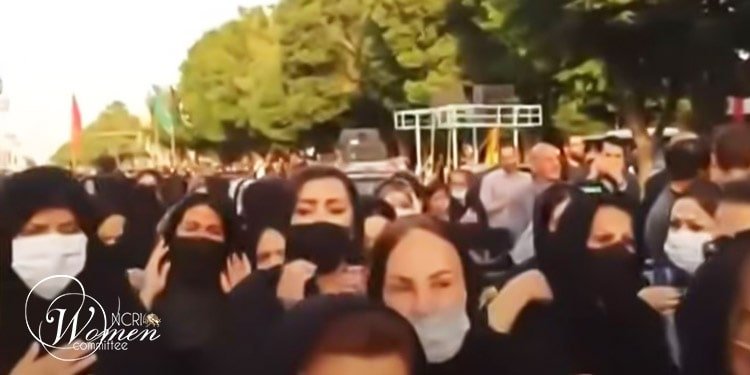 Brave women in Khorramshahr set a role model for all women

On the fifth night after the tragic collapse of a ten-story tower in Abadan that led to the deaths of dozens of people, including many women and children, the people of Iran continued their anti-regime protests in dozens of cities in Khuzestan and other provinces.

Thousands of people demonstrated in Abadan, Ahvaz, Khorramshahr, Behbahan, Omidieh, ‌Baghmalek, Sarbandar, Mahshahr, and dozens of villages in Khuzestan on Friday, May 27, 2022.

The people of Abadan lost dozens of their loved ones when a half-constructed 10-story building collapsed on May 23, 2022. The 10-story Metropole tower collapsed due to regime agents’ negligence and corruption, leaving at least 24 killed and dozens injured and under the rubble.

Anti-regime protests in dozens of cities across Iran

The people of Shahinshahr also clashed with security forces and confronted them.

Protesters in Abadan called Ali Khamenei, the mullahs’ supreme leader, a murderer whose rule is illegitimate.

In Ahvaz, people chanted, “Our enemy is right here (in Iran).”

The women of Mahshahr chanted, “Death to the oppressor” and “death to the dictator.”

Thousands of people rallied in Khorramshahr, vowing not to leave Abadan alone. Women’s presence and role were remarkable. They set a role model for all of Iran’s brave women.

In Omidieh, women and girls called on the mullahs to get lost.

In Yazd, central Iran, people held mourning ceremonies in solidarity with the people of Abadan.

The people of Shahinshahr, Shiraz, Baghmalek, and Sarbandar (in Khuzestan) also held mourning ceremonies in solidarity with Abadan.