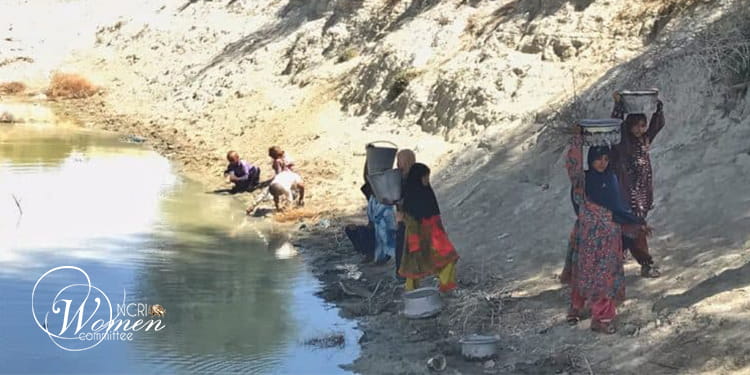 Hootags are either natural or artificial ditches collecting rainwater to provide locals with water for daily needs.

Activists in Baluchestan reported the death of a 9-year-old girl on May 21, 2022. Sajeda Bakhshan, a resident of Zahrap village, drowned in a hootag when she went with her brother to water their livestock. Their village is located in the Pirsohrab District of Chabahar County in Sistan and Baluchestan Province, southeastern Iran.

The day before this incident, a 4-year-old boy named Vali Mohammad-Jat had fallen into a hootag and drowned too.

Activists in Baluchestan also reported the deaths of two students, Maryam and Roqieh Houtt, and a boy. The report also indicated the drowning of their young teacher, Yasamin Houtt, on May 15, 2022. Yasamin had gone to save the children. Unfortunately, her attempt to rescue the children led to her death.

Javad Sepahi, the special governor of Chabahar County, unveiled the drowning of 6 children who had fallen into the water ditches in just a week. While reading out the shocking figures, he said, “Every single government member is responsible for the loss of these children.” (The state-run IRNA News Agency – May 22, 2022)

The tragedy of children drowning in hootags is a serious matter. However, there are no precise statistics available. Mehrdad Aramdar, the governor of Pollan rural district, told ISNA news agency on May 16, 2022, that “41 women and children have died in hootags in the past 11 years.” The Pollan rural district is located in the Oghyanusi and Saheli country of Chabahar.

More than 400 villages around Makran coastal region use the hootags to provide water for agricultural work, livestock, birds, and other animals. (The state-run ISNA News Agency – May 16, 2022)

Makron coastal region is located where the counties of Chabahar, Dashtiari, and Talang Qasr-ghand are.

Due to the absence of a proper clean water distribution system, people in these areas are forced to use hootags.

Hootags are highly unsafe and a source of spreading diseases as they are commonly used among both humans and animals. Another factor leading to children’s death in the hootags is Gando crocodiles, who live inside the water ditch.

Women and girls in Sistan and Baluchestan have no other choice but to take various risks and go to the hootags to provide water for drinking and more essential uses.

Is Sistan and Baluchestan really a poor province?

Sistan and Baluchestan Province has a unique potential in the mining sector due to its location on the world’s metal and mineral belts, with rich reserves such as copper, chromite, manganese, and gold. However, because of the corruption of the ruling authorities, the province’s residents are among the poorest people in Iran.

Despite the 370-kilometer stretch of water in the northern part of the Gulf of Oman and access to the ocean, this province has the least water access despite the two large dams, Dashtiari and Zirdaran water in the country.

As a result of 20 years of drought and heavy dust in these areas, the residents of this province suffer from diseases such as tuberculosis and dyspnea, or shortness of breath (The state-run ROKNA news agency – July 4, 2018).