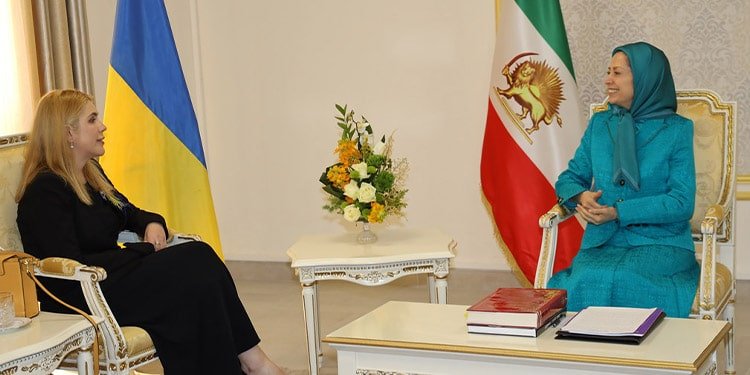 Ukrainian MP Kira Rudik, Leader of the Voice of Ukraine Party, and Vice President of the Alliance of Liberals and Democrats for Europe (ALDE) visited Ashraf 3, in Albania, on Sunday, June 5, 2022.

She met the NCRI President-elect Maryam Rajavi, visited various parts of Ashraf 3, talked to members of the Iranian opposition, the People’s Mojahedin Organization of Iran (PMOI/MEK), and had an interview with INTV, the Resistance’s satellite television.

It is an honor to meet you and get acquainted with those who have waged this difficult battle over long years and become a symbol for the people of Iran, said the Ukrainian MP Kira Rudik in her meeting with Mrs. Maryam Rajavi, the President-elect of the National Council of Resistance of Iran.

She added, Like the People’s Mojahedin Organization, we are fighting for freedom, independence, and a democratic country. The scenes of inhumane crimes in Bucha are similar to the images of the massacre of PMOI/MEK members in Ashraf, which moved me very much. The pain and suffering the PMOI has endured over the past 40-something years motivate me to carry on my struggle and activities more than ever.

The people in Iran have great sympathy for you, said Mrs. Maryam Rajavi after welcoming Ms. Rudik. The Iranian people and Resistance suffer from your pain and suffering and admire your resistance and advancement, she added.

Admiring the unique role of women in the Ukrainian struggle, Mrs. Rajavi declared, I do not doubt that with resilient women, such as yourself, the Ukrainian Resistance will be persistent, historical, and invincible.

The following paragraphs are excerpts from an interview by the Iranian Resistance’s satellite TV, INTV or Simay-e Azadi, with the Ukrainian MP Kira Rudik, Leader of the Golos Party of Ukraine.

Right now, the fights are far away from Kyiv but the resolve and the resilience of Ukrainian men and women remain the same. We are ready to fight to the last person standing.

At a time like this, you only rely on yourself. You get the help and support from other nations but you learn that you are the one who makes the decision, who calls the shots, and who is responsible.

I have visited the museum. And I have seen and talked to witnesses of the crimes committed by the regime. I have talked to people who were telling me that their loved ones died and were in prison. I have seen how people for a long time are protesting and resisting, no matter what.

And of course, the highlight of my day was the meeting with Mrs. Rajavi, and I was able to share my impressions with her and get her wisdom from her and share my admiration for her work and her activities. She is an amazing leader and a great example for all of us.

I would say that the energy that is coming from her is both wise but also extremely resilient.

And also, what I see is that here in Ashraf 3, people have been doing it for 40 years, 35 years, resisting. And my question was like how you are doing that, and they say, “easy.” Because we’re doing it for the right cause.

I don’t know how to tell my people back home in Ukraine that it may take 40 years, but I want to tell them that there are people who have been doing it for a while. And this is extremely important.

The price is high for achieving high values

Mrs. Rajavi said today a very important thing. She said when you are fighting for the high values, you are paying the high price. And this is exactly what each and every person needs to think that to get such an important point for your country as freedom, liberty, and democratic values, they mean that you may have to die for them. This is what the people of Ukraine are doing right now. They’re dying for European democratic values. And this is what we will continue to be doing.

We can only rely on ourselves. We can ask for help and we will be always asking for help, but we need to fight ourselves because it is our land. It is said that nobody would be dying for the land that is not their own. So, the sons and daughters of our land will need to be fighting for ours.

I want to support each and every person who decides to fight for their freedom. I want to support specifically women who make this choice of bearing arms and joining the resistance and making sure that they will make a difference. This is extremely important. This is what I think gives you the purpose. This is the thing that gives us hope for a bright future.

My heart is going to the men and women of the Iranian Resistance who are fighting for their freedom, I will end with the words that I ended with Mrs. Rajavi.