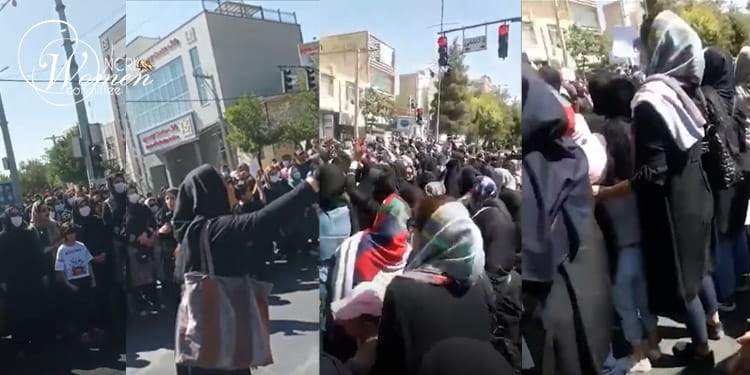 The people of Shahr-e Kord took to the streets today, Tuesday, 16 August 2022, to protest the lack of water in their city for more than a week in the heat of summer. People do not have access even to drinking water. The brave women of Shahr-e Kord were actively at the forefront of the protests.

The people and brave women of Shahr-e Kord marched to the office of the Governorate, chanting “death to Raisi” and “death to incompetent officials.” They cried out, “We are thirsty.”

“Only by taking to the streets can we earn our rights,” the people and brave women of Shahr-e Kord chanted. Young people also booed the State Security Forces as they intervened.

Shahr-e Kord is the capital of the Chaharmahal-o Bakhtiari province in southwestern Iran.

Mrs. Maryam Rajavi, the President-elect of the National Council of Resistance of Iran, saluted the people and brave women of Shahr-e Kord. She tweeted, “The brave people, esp. women, of Shahr-e Kord took to the streets to protest water cut-offs. Chanting ‘Death to Raisi’ & ‘we earn our rights only by taking to the streets,’ they confronted the Iran regime’s repressive forces. I urge all compatriots to support them. #IranProtests”

People are fed up with nosediving economic conditions, poor wages and pensions, rising inflation, and skyrocketing prices. The majority of people have a hard time making ends meet.

The prices of basic food staples, including bread, milk, dairy products, eggs, poultry, and cooking oil, have risen several folds in the past few months. Power and water cut-offs add salt to the injury.

The people of Iran see regime change and the mullahs’ overthrow as their only way out of this predicament.