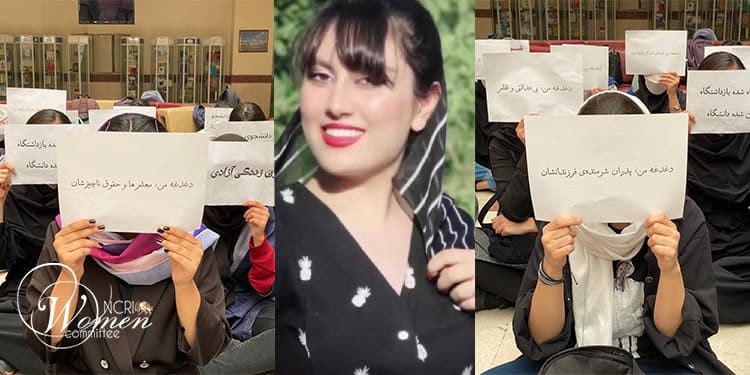 A highly confidential document reveals that 20,445 arrests were made in the first two weeks of the protests

Negin Abdolmaleki bludgeoned to death, and names of more women in the list of victims

Iranian students marked the 39th day of the Iran uprising with their passionate protests in dozens of universities across the country on October 24, 2022.

The uprising continues despite brutal suppression and massive clampdown of the regime’s repressive forces. In a highly classified document obtained by the Iranian Resistance, the Commander in Chief of the IRGC reports to Khamenei, the mullahs’ supreme leader, of 20,445 arrests during the first two weeks of the uprising.

Hossein Salami, the IRGC Commander in Chief, states in the report that the IRGC forces had arrested 9,654 persons, and the State Security Force (SSF) arrested 9,545 people. The Ministry of Intelligence (MOIS) detained 1,246.

The report indicates that 42% of those arrested and detained were under 20 years old. Salami stresses in the report that a number of those detained had been organized by the People’s Mojahedin Organization (PMOI/MEK).

The state-run Etemadonline.ir wrote on October 22, “Between 5,000 to 6,000 persons, at least, have been arrested in the month-long street protests in Tehran, alone.”

Another state-run website, Khabarfoori.com, wrote on October 21, “At least more than 20,000 have been arrested in the recent unrest across the country.”

Day 39 of the Iran uprising marked by university protests

Women in Tehran rallied in the City Theatre (Teatr-e Shahr) Metro Station with chants of “Death to Khamenei.”

Students of Khajeh Nasir University in Tehran strongly opposed the presence of the Raisi government spokesman, Bahador Jahromi, on their campus to hold a theatrical dialogue. Khajeh Nasir students vowed to overthrow Khamenei this year and chanted, “Murderer, get lost!” and “We don’t want a corrupt system, nor a murderer as a guest!” among dozens of other anti-regime slogans.

Sharif University’s male and female students had walked into the main self-service dining hall yesterday, thus rejecting the university’s policy of gender segregation in the dining areas. Today, the university’s officials prevented the entry of students “who had caused unrest.” The students reacted by holding a sit-in protest outside the university gates.

Girl students were at the forefront of all university protests. (Watch the video links.)

Teachers went on strike in Sanandaj, Saqqez, Marivan, and Divandarreh.

Medical physicians in Shiraz protested with chants of “Death to the dictator” despite security forces lobbing tear gas at them.

In step with the protests, the regime is viciously cracking down.

More young women were bludgeoned to death by the regime’s security and intelligence services.

According to the Kurdish media, Negin Abdolmaleki, 21, from Qorveh, was murdered by security forces during a protest in Hamedan on October 11, 2022. They used batons and repeatedly hit her in the head. A severely injured Negin returns to the Industrial University of Hamedan dormitory, where she dies due to severe bleeding.

Security forces at the university threatened eyewitnesses and her family. They ordered them to say that Negin had died from intoxication by eating expired canned fish.

Negin Abdolmaleki was a medical engineering student at the Industrial University of Hamedan.

In Tehran, the principal of a girls’ high school called “Sadr” made the students take off their clothes to search and find if they had mobile phones. Parents gathered outside the high school protesting. Other reports said the principal had beaten the students, and some were in critical condition.

The Iranian Resistance announced the names of 260 people killed by security forces during the uprising, which started on September 16. The list includes the names of dozens of women, including the following:

Setareh Tajik, 17, was killed in Tehran on September 22.

Parisa Asgari was killed in Tehran on October 13.

The clerical regime’s intelligence services also kidnapped Fatemeh Mashhadi Abbas, a dentist and an associate professor at Melli University, on October 19, 2022. The news and the video of this kidnapping were published on October 22.