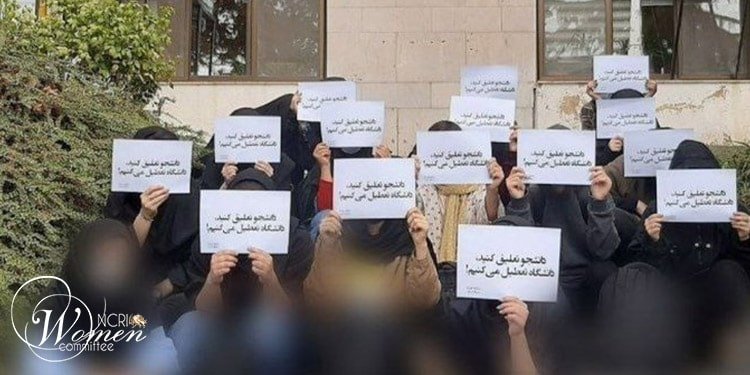 As Iran uprising continues on 46th Day, repressive forces step up their brutality

Another teenager, Parmis Hamnava, dies of internal bleeding after being beaten at school

Monday, October 31, marked the 46th day of the Iran uprising with students holding protests and sit-ins in dozens of universities in Tehran and other cities across Iran. Female students are particularly active in these protests and taking the lead.

Students of the all-female Az-Zahra University held a protest sit-in against the arrest of one of their fellow students. They held placards that read, “No suspensions for students, otherwise we just shut down the school.”

In the prestigious Amir Kabir University (a.k.a. Polytechnic), in downtown Tehran, students chanted, “We swear by the blood spilt from our fellow students, that we will remain steadfast to the end!”

Students at the Industrial University of Shahrud, Azad University of Mashhad, the universities of Sanandaj, Rasht, Babol, Tabriz, Sirjan, Urmia, Qazvin, and the School of Technology of Shiraz also held sit-in protests.

Student protests in so many universities across Iran, despite the heavy crackdown on them and shooting attacks on students on campuses indicate that they are not terrified by the IRGC’s savagery and prepared to pay the price of freedom.

In other news, it has been reported that agents of the Intelligence Department in Sanandaj had attempted to arrest some female students from the Fereshtegan Dormitory on Sunday night, October 30. However, university professors went to their aid and prevented the agents.

Female students, however, have been abducted from other dormitories. On Saturday night, October 28, Mahshid Moshashaii was arrested at a student dormitory in Kermanshah and taken to an unknown location.

Meanwhile, a ninth grader in Iranshahr, Sistan and Baluchestan province, was beaten by security agents at school and died of severe injuries. Parmis Hamnava studied in Parvin Etesami High School