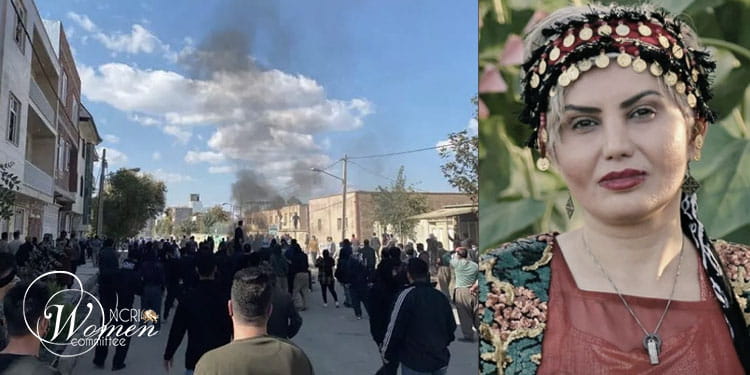 Funeral of Nasrin Qaderi turns into massive protest in Marivan

Women lead the protests in the streets, universities, and schools

The people of Marivan turned the funeral ceremony of Nasrin Qaderi into a massive protest on Sunday, November 6, 2022.

Tehran University PhD student Nasrin Qaderi, 38, was in a coma following multiple blows to her head. The state security forces in Tehran hit her in the head by batons during a November 4 protest in Tehran, where she was studying philosophy.

She died in a hospital on November 5. Fearing public anger, state forces secretly transferred and buried her in a local cemetery early morning.

Security forces tried to prevent people from attending her burial, but protesters took to the streets and protested Nasrin Qaderi’s killing with chants of “Death to Khamenei,” and “Death to the dictator.”

Many citizens attended the place and paid homage to Nasrin Qaderi.

Intense confrontations with security forces continued well into the night and the city was described as a war zone. As locals stood their ground, security forces opened fire on them using AK-47 assault rifles and shotgun pellet rounds.

Latest reports from the city of Marivan indicate an ongoing general strike and continued confrontations between protesters and security forces in various parts of the city until Monday evening.

Monday, November 7, armed forces in Siahkal, northern Iran, opened fire on the crowd participating in the 3-day memorial of Erfan Zamani, killed during the protests on November 4. Locals say non-native forces had been deployed to impose the crackdown.

High school girls in Sabsevar, northeastern Iran, led a protest in the city on Monday morning.

Sunday, November 6, 2022, young women took the lead in nightly protests in Naziabad, south Tehran, and Atisaz Townhship, in north Tehran, chanting, “This year is the year of sacrifice which will overthrow Khamenei!!” “This the final message, the entire system is our target!”

In downtown Tehran, Sattarkhan avenue, young women broke the silence of the night with chants of “Death to the dictator!”

Young women and men in Sadeghieh district in west Tehran also chanted, “Mullahs must get lost!” Youths also held a protest in the second square of Sadeghieh with chants of “Death to the dictator!”

Young women and men in Bushehr, southern Iran, also blocked a highway and chanted, “Freedom, freedom, freedom!” while all the cars accompanied them in support and honked their horns in solidarity. Some drivers got off their cars and joined the youths in protest.

In Isfahan, central Iran, women chanted, “Bloodthirsty Khamenei, we will bring you down!”

In Zahedan, school children chanted death to the dictator on their way to school.

Iranian university students demanded freedom of their fellow students. They chanted, “Freedom is our right, our power comes from our unity!”

The clerical regime forces are continuing with widespread arrests of doctors, nurses, and the medical staff who help those injured in the protests. Lawyers, journalists, and activists are also being rounded up.

In the meantime, many young people are abducted every day particularly in Kurdistan and Sistan-and-Baluchestan.

High school principal attacks a girl student, throws her down the stairs