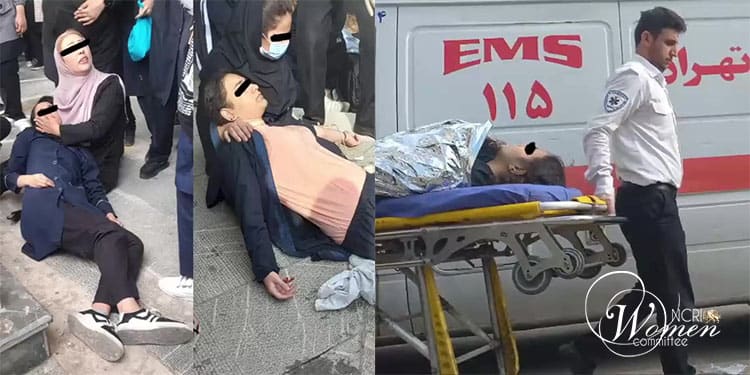 The girl beaten by high school principal backed by IRGC

High school principal attacks a girl student, throws her down the stairs

High school principal attacks a girl student, throws her down the stairs.

As the Iran uprising is well into its 8th week, not only the regime’s security forces, but also their agents and operatives elsewhere are becoming more brutal toward protesters.

According to social media reports, the school principal of the Ermineh Mosallanejad Technical Vocational School for Girls in Shahr-e Rey called the students of all classes to take a written commitment from them not to protest. When the students refused to sign the pledge, she threatened them, beat them, and threw one of the girls down the stairs, as a result of which she went unconscious.

The school principal named Imenpour is married to a member of the Revolutionary Guards (IRGC). She called the security department, and they sent two ambulances to take the students.

According to eyewitnesses and videos published on social media, the said ambulances did not have license plates. The clerical regime uses ambulances to transport detainees to prisons.

High school students chanted anti-regime slogans and tore down pictures of the regime’s supreme leader in Sanandaj, Ahvaz, Karaj, and other cities.

Students of Tehran’s Allameh University rallied and chanted, “We are standing firm, college students and workers!” and “A united Allameh will never surrender even if it had to go through a sea of blood.”

In the meantime, the people of Marivan gathered at the grave of Nasrin Qaderi and paid homage to their beloved daughters with chants of “Death to Khamenei,” and “freedom, freedom, freedom!”

The Iran uprising continues despite 550 protesters slain and more than 30,000 detained.