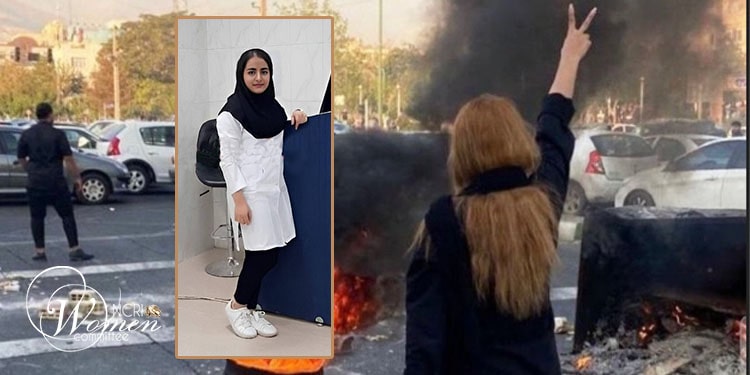 On day 63 of the Iran uprising, medical student Aylar Haghi was killed during protests in Tabriz.

As this news report is being published, Iranian women and men are protesting the clerical regime in the streets of Tehran and other cities. On Day 63 of the Iran uprising and the third day of commemorating the November 2019 uprising and its slain heroes, Iranian people, women, and youths have come to the streets to push for regime change in Iran.

The Iranian regime mobilized some 50,000 troops in Tehran this morning to contain the protests, however, as night fell, young people took to the streets.

In Shahr-e Ziba, Tehran, the crowd chants, “This is the year Seyyed Ali (Khamenei) is overthrown!”

Locals in the Ekbatan district of Tehran are establishing roadblocks and taking control of their streets, chanting, “Freedom, freedom, freedom!”

In the Sadeghieh District of Tehran, protesters chanted, “This is no longer a protest; this is the revolution itself!”

In Fuladshahr, Isfahan, and Piranshahr, West Azerbaijan, people are chanting, “Death to Khamenei!”

In Dayyar, Bushehr, young people have blocked the road. In Vilashahr, Isfahan, young people are chanting: “Don’t think it’s just today! We have plans for every day!”

In Bukan, Kurdistan, the city’s courageous people turned the martyrs’ funeral into a protest and forced the IRGC guards out of the cemetery. They later took over the city’s municipality and controlled parts of the city. The people of Mahabad walked to the funeral despite IRGC’s blocking of the roads.

During the crackdown, Wednesday night, November 16, on protesters in Tabriz, a young medical student, Aylar Haghi, was killed.

According to social media reports, Aylar Haghi had taken refuge in a building, where the regime’s mercenaries found her and pushed her from the top of that building. A rebar pierced through her abdomen and out from her back. She died instantly.

Other footage circulating on social media has registered the security forces’ brutality towards women. In a metro station in Mashhad, Morality Police forces arrested young women in the station and maltreated them. Also, visit these links.

The clerical regime’s plainclothes agents opened a barrage of fire on protesters in the city of Izeh, in Khuzestan, southwestern Iran. They committed a massacre, a crime against humanity, killing and wounding dozens of people. Among those killed was a 10-year-old boy, Kian Pirfalak, who was shot by security forces when passing by in a car.

Heavy clashes occurred in the Shadabad Iron Market in Tehran, where security forces fired live bullets and tear gas at people. Dozens of people were killed and wounded.