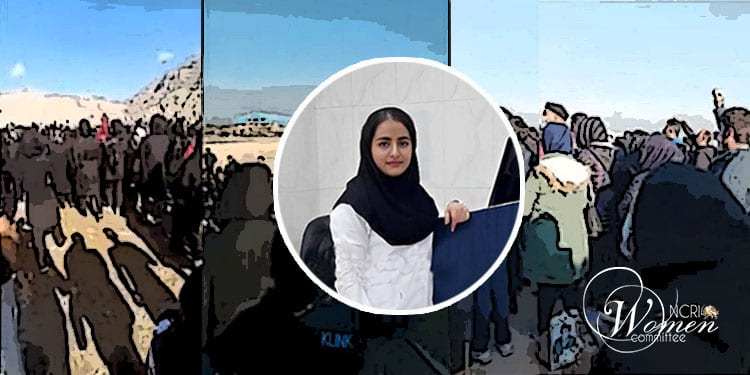 On Friday morning, November 18, 2022, Day 64 of the Iran uprising, thousands of people attended the funerals of the slain heroes of nationwide protests. In massive demonstrations in the cities of Izeh, Mahabad, Tabriz, Semirom, Kamyaran, Bukan, Sanandaj, Qazvin, etc., the mourning crowds called for the regime’s overthrow with chants against Khamenei.

In the meantime, people in different cities of Sistan-and-Baluchestan province started demonstrations after Friday prayers with slogans of “death to Khamenei.”

The funeral ceremony of Aylar Haghi, slain during the protests, was held on Friday, November 18, in Wadi Rahmat Cemetery in Tabriz. The participants chanted, “Khamenei will be overthrown this year” and “We are all Aylars; fight, and we will fight back!”

Aylar Haghi, 23, a medical student of Tabriz Azad University, died during the protests on the evening of November 16. According to social media reports, Aylar Haghi had taken refuge in a building but was thrown down by repressive forces and died after a rebar pierced through her abdomen.

Also, people buried the body of Kian Pirfalak, a ten-year-old child machine-gunned by IRGC guards while passing by in a car with his parents. Kian died instantly, and his father, Maysam Pirfalak, was taken to Golestan hospital. Bullets hit him from the left and injured his spinal cord. Mr. Pirfalak underwent surgery once.

Kian’s family kept him with ice at home until the burial, fearing that guards would steal his body from the morgue. Before that, the IRGC guards had snatched the body of 14-year-old Sepehr Maghsoudi from the morgue. Sepehr had been shot in the head.

Born in 2013, Kian Pirfalak loved to become a pilot and an inventor. He was a member of his school’s robotic team.

At the same time, the people of Izeh held the funeral of 14-year-old Artin Rahmani, who was killed by security guards in Izeh on November 16. The large crowd of participants chanted, “Death to Khamenei” and “Death to the entire system.”

In addition, several thousand people of Mahabad gathered in Ferdows Garden for the burial of Azad Hosseinpour, also killed by guards during the protests the day before. People accompanied him with the slogan “Death to Khamenei.”

Also, in different cities of Sistan-and-Baluchestan province, including Zahedan, Saravan, Chabahar, Khash, Iranshahr, Taftan, Ashar, etc., large crowds of worshipers demonstrated in the streets after the Friday prayer, chanting “Death to Khamenei,” “Death to Basiji,” “Khamenei is a murderer, his rule is illegitimate.”

50 days past Golrokh Iraee’s arrest, she remains incarcerated in limbo

More than 50 days after her arrest, the human rights defender Golrokh Ebrahimi Iraee remains incarcerated in Qarchak prison without bail or visitation rights and access to a lawyer.

Mahmoud Haj Moradi, the interrogator of the 2nd branch of the Evin Prosecutor’s Office, arraigned her on charges of “propaganda against the state” and “assembly and collusion.” Golrokh asked him, “Who did I collude with and how?” Haj Moradi did not have an answer! Despite all the follow-ups made by her family, the security forces prevent the release of Golrokh.

Agents of the intelligence services broke into Ms. Iraee’s residence on September 26. They entered her room, kicked her in the stomach, and threw her to the cabinet. They ransacked the house and confiscated some of her belongings. She is charged with “assembly and collusion,” as well as “propaganda against the state” through her activities on her social media accounts.

The former political prisoner has been arrested and imprisoned several times since 2014. She had been recently released from Amol Prison on May 9, 2022.

Women arrested during protests in Rasht are mostly under 25

Recent reports from Rasht indicate that the average age of the women arrested during nationwide protests in Rasht is between 20 and 40 years old, most of whom are under 25 years old. The women arrested during the nationwide protests in Rasht are locked up in the quarantine ward of Rasht’s Lakan prison, known as the “Reform and Rehabilitation Center.”

Regarding the detention of arrested women and girls in the “Reform and Rehabilitation Center,” a reliable source said, “Presently, about 70 women arrested during the protests have been transferred to this ward. Before this, about 50 women were imprisoned in this place. But with the increase in arrests, the prison authorities were forced to add prison staff to control this ward.”

Now, with the arrest of thousands of young people, the Prisons Organization must use all the facilities at its disposal, even empty silos, to lock up the detainees in completely inhumane conditions without the least facilities.