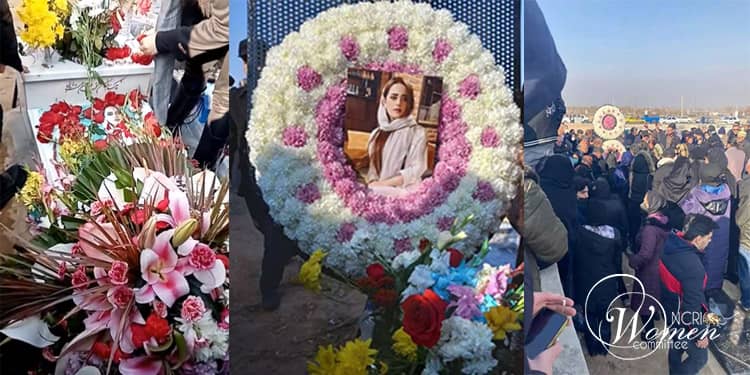 The 40-day memorial of Aylar Haghi held despite heavy repression

On the morning of Tuesday, December 27, 2022, on Day 103 of the Iran uprising, the 40-day memorial of Aylar Haghi was held with widespread participation of the people of Tabriz despite the heavy presence of security forces.

Chants of “death to the dictator” echoed in the cemetery during the 40-day memorial of Aylar Haghi. Participants shouted slogans in Turkish, “death to the dictator,” and “We are fighters, fight and we will fight back.” They renewed their vows to continue her path to freedom. At the end of the memorial of Aylar Haghi, the people of Tabriz chanted, “Death to Khamenei,” and “Khamenei is a murderer, his rule is illegitimate.”

During the 40-day memorial of Aylar Haghi, her father thanked everyone who had sympathized with them. He also criticized state television for the false report they aired about the death of Aylar. He said, “That report, that the reporter of the state TV and Radio prepared in just two minutes… He was an interrogator and a judge at the same time. He expressed his opinion and voted on his own. He disgraced all the families related to Aylar Haghi. God will not forgive him, and he will have to account for what he did.”

Aylar Haghi was a medical student at the University of Tabriz. She was murdered during the crackdown on protesters in Tabriz on Day 63 of the Iran uprising on November 16, 2022.

Initial reports on social media indicated that Aylar Haghi had taken refuge in a building. The regime’s mercenaries found her and pushed her from the top of that building. A rebar pierced through her abdomen and came out from her back. She died instantly.

Later, however, one of her relatives told the media that security forces shot Aylar in the head from behind and killed her.

On Tuesday, December 27, 2022, on Day 103 of the Iran uprising, the people of Mahabad held the 40-day memorials of Azad Hosseinpour, Mohammad Ahmadi, and Kamal Ahmadpour. The people of Bukan commemorated Hiva Jan-Jan on the 40th day since his demise with the slogan, “martyrs are alive.”

The participants in the 40-day memorials turned the mourning ceremonies into big anti-regime rallies with chants of “This year Seyed Ali (Khamenei) shall be overthrown,” and “Death to the supreme leader with so many years of crimes.”

Security forces also surrounded Tehran’s Behesht-e Zahra cemetery to prevent people from gathering for the 40-day memorial of a slain protester, Hamidreza Rouhi. For this reason, a limited number of his family members and friends could gather at his tomb and honor his memory. However, the students at the Melli University of Tehran held a ceremony and paid tribute to Hamidreza Rouhi and Kian Pirfalak. Also, young people performed a song in memory of Hamidreza Rouhi at the Sadeghieh metro station.

At night, women, and youths in various districts of Tehran, including Poonak and north Amirabad, held night rallies chanting “Death to bloodthirsty Khamenei,” “Death to the principle of Velayat-e Faqih,” “Death to the regime of executions,” and “Death to the child-killing regime.”