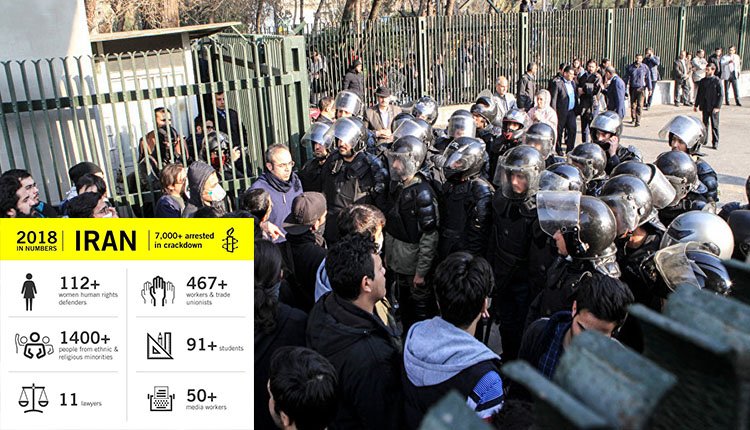 Amnesty International has described 2018 “a year of shame for Iran” as the Iranian regime arrested more than 7,000 dissidents in a “wide-scale crackdown”.

On the anniversary of the massive protests across Iran against poverty, corruption, and authoritarianism, Amnesty International announced on January 24, 2019, that the Iranian authorities carried out a “shameless campaign of repression” during 2018, crushing protests and arresting thousands in a wide-scale crackdown on dissent.

“2018 will go down in history as a ‘year of shame’ for Iran. Throughout the year Iran’s authorities sought to stifle any sign of dissent by stepping up their crackdown on the rights to freedom of expression, association, and peaceful assembly, and carrying out mass arrests of protesters,” said Philip Luther, Amnesty International’s Middle East and North Africa Research and Advocacy Director. “The staggering scale of arrests, imprisonments and flogging sentences reveal the extreme lengths the authorities have gone to in order to suppress peaceful dissent.”

Throughout the year and particularly during the months of January, July and August, the Iranian authorities violently dispersed peaceful demonstrations, beating unarmed protesters and using live ammunition, tear gas and water cannons against them.

Hundreds were sentenced to prison terms or flogging and at least 26 protesters were killed. Nine people arrested in connection with protests died in custody under suspicious circumstances.

In addition, at least 112 women human rights defenders were arrested or remained in detention in Iran during 2018.

“Throughout 2018, the Iranian authorities waged a particularly sinister crackdown against women’s rights defenders. Instead of cruelly punishing women for demanding their rights, the authorities should put an end to the rampant and entrenched discrimination and violence they face,” said Philip Luther.

Amnesty International urged governments engaged in dialogue with Iran to repudiate the discriminatory crackdown, saying they “must not stay silent while the net of repression rapidly widens. They must speak out in the strongest terms against the crackdown and forcefully call on the Iranian authorities to immediately and unconditionally release all those jailed for peacefully expressing their right to freedom of expression, association, and assembly, including through their human rights activism.”