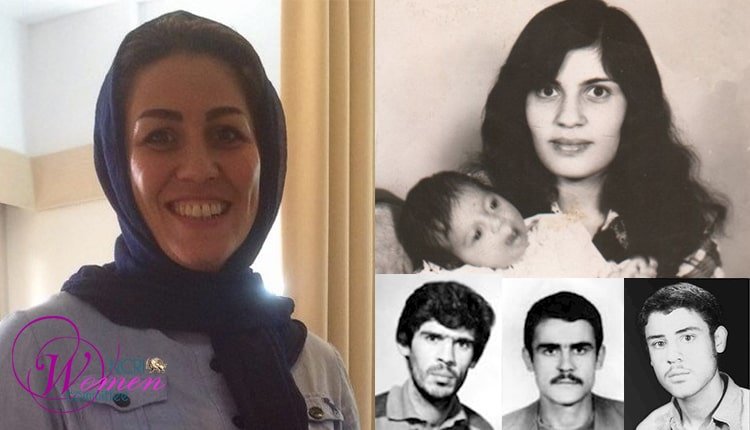 On the tenth year of her imprisonment, political prisoner Maryam Akbari Monfared[1] sent out a letter from the women’s ward of Evin Prison, in which she recounted her own and her family’s sufferings in these years, vowing to remain steadfast.

Following are excerpts from her letter:

In the middle of the night of December 30, 2009, in a cold and rainy night, I was separated from my children ostensibly to be taken to the Follow-up Office of the Ministry of Intelligence for some briefing and to be returned at noon on December 31… Since my husband was not home, I asked them to let me go to the Follow-up Office early in the morning after sending my children to school, but they did not agree.

These years saw many ups and downs.

I was exiled to Gohardasht and Qarchak prisons. My beautiful daughters grew up, but nobody knows how things went by. Just as nobody knows how things went by for our bereaved fathers and mothers in anticipation for their children. Many parents received bloody bags on visiting days instead of seeing their loved ones. Many parents received a fifty toman bill for a dower instead of seeing their daughters. All these years have passed with all their hardships.

I spent time in cells where my sister and brothers lingered years ago. We used to look for any indication of our loved ones in Khavaran. Now, I feel closer to them. I feel their presence, here. I find their indications here, carved on every door and wall.

This atrocious regime has always persecuted us. I lost my mother when I was only a child. My father passed away while waiting for my siblings. But we always knew one thing: that the reformists, the fundamentalists and the moderates were all complicit in taking the lives of our loved ones. The fundamentalists held up a sword, and the reformists wore masks. And sometimes, they were even closer to what one could believe. Deceptively, they sat at our tables inside the prison walls, infiltrating our privacy with the face of a friend. Under the pretext of sympathy, they lashed us so harshly that the wounds cannot be healed unless and until the time their bloody crimes are revealed…

The years passed with all their ups and downs. Now, I stand stronger than ever facing the rest of my sentence. I believe that there are enlightened people who struggle to defend what’s right. I joined them, so that with my other dear compatriots, we can be the voice of the voiceless in our wounded society.

On the eve of the tenth year of my imprisonment, I salute each and every freedom fighter who has emerged stronger through years of incarceration, deprivation and pain. They are happy that they are more aware and they have learned more about our oppressed society.

[1] Maryam Akbari Monfared was arrested at her home at midnight on December 30, 2009, and was sentenced to 15 years’ imprisonment on June 1, 2010, on charges of Moharebeh (waging war on God) through supporting the People’s Mojahedin Organization of Iran.

In all these years, she has been deprived of the right to leave and she has been denied medical care and treatment while suffering from various illnesses, including thyroid malfunction and joint rheumatoid arthritis.

After filing a complaint against the Iranian regime on October 17, 2016, on the execution of her siblings in 1988, Maryam Akbari Monfared was denied medical treatment by the Tehran Prosecutor in a reprisal. She was also threatened to receive an additional 3 years sentence and be exiled to Sistan and Baluchestan Prison.

Two of Maryam Akbari Monfared’s brothers were executed on the orders of the revolutionary courts in 1981 and 1984 for “association and membership in the People’s Mojahedin Organization of Iran.”

Her sister and younger brother were also executed in the summer of 1988, in the massacre of 30,000 political prisoners.

In 2013, the Revolutionary Court received 1.15 billion tomans in bail to grant her a temporary leave but in the final moments when her children were awaiting her arrival, they were told that the leave had been canceled and the Minister of Intelligence sent a note that she cannot have a leave.