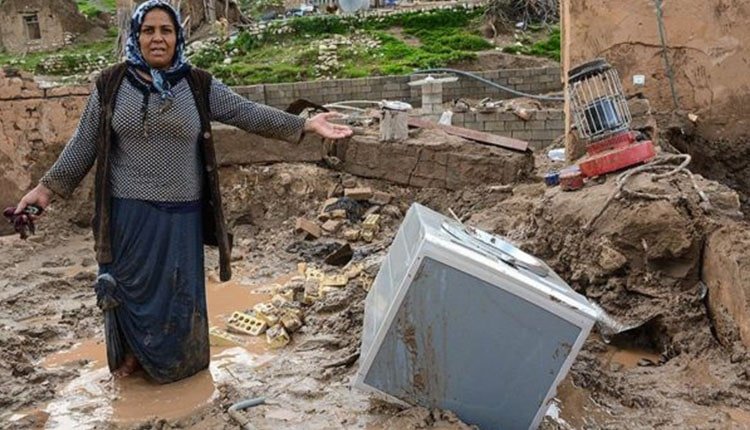 April 22 marks the International Mother Earth Day designated by the United Nations to increase awareness about the environment and appreciation of Mother Earth. In Iran, however, the environment has been “massacred” like her people at the hands of the mullahs’ regime. The scale of destructions and damages caused by the devastating floods which has overrun most Iranians provinces in the beginning of the new Iranian year, attests to the destruction of Iran’s human and material resources by the mullahs.

Citing the European Commission, the United Nations estimated that at least 12 million citizens across Iran have been affected by the recent devastating floods. Eleven provinces are still grappling with the problems caused by floods and overflow of rivers. The European Civil Protection Mechanism (EUCPM) says the incident has been the worst natural disaster happening in Iran in the past 15 years, affecting 2,000 cities and town in 31 provinces. ReliefWeb, the specialized digital service of United Nations Office for the Coordination of Humanitarian Affairs (OCHA) says two million people are in need of humanitarian aid and over half a million people have been displaced from their places of residence.

In the past 40 years, the clerical regime’s fraudulent agencies, particularly the Revolutionary Guard Corps (IRGC), have reaped huge profits through destruction of the environment and nature including by irregular construction of hundreds of dams and tunnels, diversion of the natural paths of rivers, confiscation and sale of lands on river banks, illegal blocking and construction in the natural paths of flood, deforestation to sell the woods and lands, etc. They have done so without observing the basic rules essential to any construction. Consequently, they have left the people of Iran defenseless in the face of natural incidents. If the natural environment of Iranian cities and villages had not been so vastly damaged, the heavy rainfalls could have been reigned in and the deprived people of Iran would not have suffered such extensive losses of lives and properties.

As a result of the mullahs’ destructive policies, the heavy rainfalls in spring ravaged thousands of Iranian villages and towns and devastated people’s lives. Almost one month after the devastating floods and the national flood disaster, the regime has not taken any effective measures yet to help the afflicted people in the flood-hit areas who are well aware that like the people of Bam and many cities in Kermanshah who have not been resettled years after the earthquake, they, too, must not tie their hopes to this regime. The situation of women after the devastating floods

Women and children have suffered most in the devastating floods the swept through the country. Women are often left alone in taking care of their families. They have to endure tremendous pressure in circumstances where they have little or no access to food, water, health care and medical treatment.

Displaced women are subject to greater violence when they have no shelters. Women often suffer psychological harms while they lack any form of support, despite loss of their family members, homes and other properties. Such disruption of their routine life imposes an adverse impact on their mental health.

A month after the floods in Golestan Province, some regions are still submerged under water. A pregnant woman who has lost all her belongings in the devastating floods says, “On the night when the floods began, I almost fainted. The flash floods did not have mercy on anyone. Everything my husband and I had collected over the past two years were washed away.”

The woman is now staying with a family in a village not hit by floods in anticipation of delivery of her baby.

Another woman from Agh Qala said, “We worry about the dreadful economic conditions. How could we buy all the things that have sunk under water and totally damaged? How can we get the money?”

Another woman said, “The efforts to inform the public of the floods were weak. We used to reside in Kolabad region. We were told of rains, but not of such devastating floods.”

A young woman by the name of Zeinab said, “I used to live in the Mehr Housing (complexes). I could see the water rising higher and higher every moment. Before the road was blocked, I escaped home… My children are very nervous here and are constantly fighting each other.” A middle aged woman by the name of Ana Sultan wiped her tears and described their situation after the devastating floods. “We were stuck for one-and-a-half days on the upper storey of the house, without any food or toilets. People came with trucks. We jumped from up there and were saved.”

In the video clips published in social media, women and children of Lorestan Province were shown speaking of being defenseless in the face of the devastating floods. They stressed that the only relief they had received in such drastic conditions came from ordinary people.

A flood-hit girl said, “We have not received any assistance, so far. We sleep in cars at night. We have no place to go. We have no tents and did not receive one from the government… We need shelter. It is very cold here.”

Residents of flood-hit areas are angry at the regime for its failure to attend to their needs. A young woman, whose little children have not had any meal for several days after the floods, addressing the regime’s leaders, says, “Do not show us any more of the films on Syria and Lebanon! Do not scare us of becoming another Syria! The situation here is worse than Syria! You have taken away everything we had and gave them to Gaza and Lebanon. It’s worse here! Gentlemen, IRGC generals, do you know anything of Mamoulan and Pol-e Dokhtar? Mr. Khamenei, do you know of our situation? While you’re sitting in your Niavaran Palace, the people’s homes were ruined and no government agency is giving any help!”

Another woman in Khuzestan says, “Nothing is left for us! No coolers and no refrigerators! Our farmlands have been destroyed. We have nothing!”

At least 20 women died in the devastating floods

According to the information collected from the statistics announced by the regime, at least 20 women and several girl children have died in the devastating floods throughout Iran. No exact figures have been announced by the regime officials. But real evidence, including the number of submerged villages and the cities destroyed by floods indicates that the actual figures must be much greater.

On April 15, 2019, the body of a 29-year-old woman was found near Malihan village in Seilab, after the floods in Khuzestan Province. Malihan village is located near Ahvaz and has been surrounded by waters for more than 10 days.

270 villages in Khuzestan have been evacuated and 120,000 people have been displaced. In Bamdej, families live in train wagons. Locals have reported that instead of sheltering people, the Red Crescent of Khuzestan is selling them tents, 500,000 tomans each.

Khuzestan is one of the most prolific plains in Iran and is capable of producing wheat, rice, sugar, dates, and fish for the whole country. Its residents, however, are now engaged in a life and death battle.

In Ahvaz, capital of Khuzestan, sewage water has been running throughout the Pardis district, causing alarm over incidence of viral diseases and infections.

In remarks made on April 14, 2019, Pezeshkian, deputy speaker of the mullahs’ parliament, revealed that the Iranian regime is neither capable nor it wants to compensate for the damages the people of Iran suffered as a result of the devastating floods. He said, “It is impossible for the government to respond to these problems just by passing legislations… When it gets to action, the government has no money to do it. It cannot dredge or repair the dams.”

It is impossible to thoroughly describe the scale of the damages and the human and material losses caused by the devastating floods. However, it is clear that the only solution for putting a decisive end to the disaster in Iran is regime change by the Iranian people and their democratic alternative, the National Council of Resistance of Iran.

Therefore, the most urgent demand of Iranian women who have borne the brunt of all pressures and oppression under the mullahs’ regime, is freedom and overthrow of the corrupt regime which has squandered Iran’s national resources. In none of the previous disasters in recent years, including the earthquake in Kermanshah, and now the nationwide flood disaster the overwhelmed the entire country, the mullahs’ regime has given any support to the people. The only thing they care about is preserving their own rule.