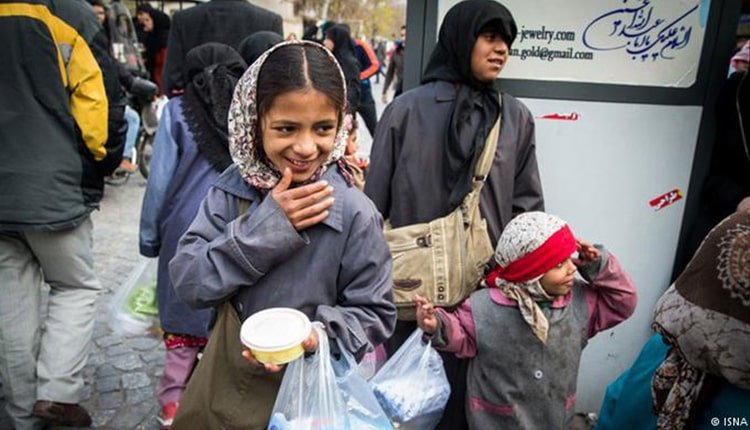 June 12 marks the World Day Against Child Labor. At least a quarter of Iran’s students are forced to quit school every year with a large number of them joining the estimated 3 to 7 million child laborers in Iran.[1] This is mainly because of pervasive poverty and lack of social support for destitute families in Iran while education is neither free nor mandatory.[2] A large number of these children are girl child laborers.

A recent video clip produced in February 2019 on the situation of child laborers featured interviews with these children who spoke of being abused in various ways by municipality agents.

A girl child laborer said, “Me and my two brothers were doing our homework and at the same time selling walnuts when municipal agents came and caught my two brothers. I told them, ‘what do you want to do with them?’ Then they caught me, too… They took off my older brother’s clothes and started beating him by sticks. My younger brother started crying. Simultaneously, they told me to polish their shoes, I said I won’t. Then they rubbed black polish on my face.”

A social worker said the girl child laborers are sexually abused in addition to being brutalized. “Two of the girl child laborer who work on the intersection, were forced into a car by municipal agents. One of the agents told one of the girls to unbutton her clothes. This girl even told us that when she was taken to the police station, she was separated from other kids and forced to take off her clothes.”

Another girl child laborer talked about sexual abuse of her friend by municipal agents. She said, “One day, when I saw Sara, I asked her, ‘Why are you upset?’ She said municipal agents caught me and mistreated me… They pulled my scarf, and touched me. When I screamed, they stepped away. But when I went to the office of the municipality and told my story, they did not believe me. They said I was making up the story so that they would let me go.”

A girl child laborer by the name of Maryam recounted, “I don’t remember the exact location, but it was me and my cousin. We were selling walnuts. Then all of sudden a municipality agent came and took my hand. He didn’t want me, but he caught my cousin. He beat him so hard. Then he asked me, “How much money have you earned?” I said, “We earned nothing.” Then he said, “I must check your purse.” I didn’t give him my purse. Then he hit me in the back with a stick and punched me in the arm. Then he snatched my purse, and I ran away from him…”

Earlier, in November 2017, following a research done on 400 child laborers, it was revealed by an official of Social Services in Tehran’s Municipality that some 90% of child laborers are sexually abused. “We are going to prove that 90 per cent of child laborers get raped.”[3]

The report narrated the stories of girl child laborers who are assaulted and raped since very young age due to poverty and addiction of their parents.

One of the characters in this report was Rana, 19, who had been engaged in dangerous and harmful jobs such as making spare parts for cars and working with acid since she was 11. Rana’s father is an addict and used to sexually assault her four daughters. The girls were also victimized by other men in the community.[4]

Elham Fakhari, member of Tehran’s City Council, was cited in the report as saying that “sexual abuse is the greatest ailment among young scavenger children.”

Girl children in Iran are the most innocent victims of the mullahs’ medieval regime.

On March 17, 2019, on the eve of the New Persian Year, a girl child laborer died under the rubble of her home in South Tehran, in the farmlands near Shahr-e Rey.

A 9-year-old girl child laborer by the name of Sadouri and her brother, Rashid, 11, died under the debris when their home was destroyed under heavy rain. The 11-year-old Rashid used to farm as his sister, Sadouri, was a girl child laborer peddling on the streets to help their family earn their living.

After the heavy rain, their home collapsed. Their mother and siblings ran out, but the girl child laborer, Sadouri, and her brother remained under the rubbles.[5]

More than 200 families live in the desert-like area surrounding these farmlands for over 30 years. The houses built in this area are made of mud and wood and are not resistant to rain and snow. The children who live in these homes are essentially child laborers and earn living by pan handling or peddling on the streets.

[1] Nahid Tajeddin, member of the board of directors of the Social Commission of the Majlis, the state-run Salamat news, September 27, 2017

[3] The executive director of the Organization of Social Services in Tehran’s Municipality, the state-run Salamatnews.com – November 8, 2017