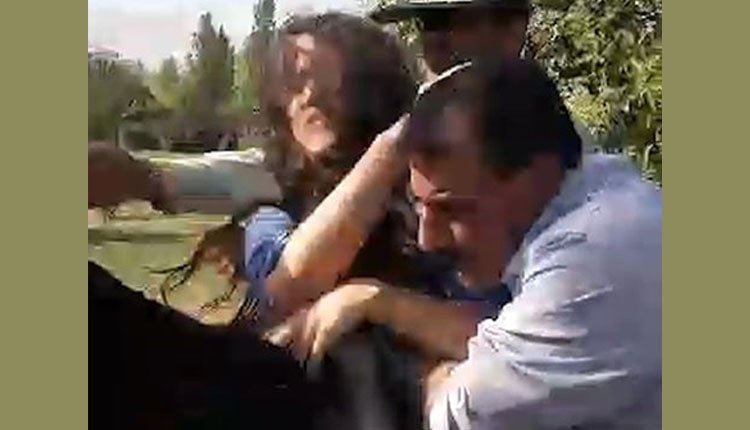 The violent arrest of a young woman in Tehran caused public outcry in Iran.

Plainclothes agents of the State Security Force (SSF) arrested five young women and men in a park in Tehranpars where they were playing water guns on Saturday, June 22, 2019.

A video clip posted in the social media shows a male plainclothes agent grabbing a young woman, said to be 15-16, and violently pushing her into the police car. The driver of the SSF car and all other surrounding agents were wearing plainclothes. (The state-run Fars news agency – June 24, 2019)

According to eye witnesses, the youths were playing water guns in the park. Monday, June 24, 2019, Chief of Tehran’s Police (SSF) Hossein Rahimi told reporters on the arrests of five young women and men, “They are charged with refusing to comply with the orders of police, breaking the social norms, clashing with police agents, and also removing the veil. They are still in the custody of police.”

The violent arrest by plainclothes agents of the State Security Force aroused much outrage in society. Even a state-run news agency cited a social pathologist as saying, “This type of behavior, is neither punitive, nor humanitarian or Islamic. We have laws. The law does not allow anyone to act in any way they want. At the same time, we have policewomen. In such cases, where women are involved, policewomen have to take action and speak.”

In reaction to the public outcry against this violent arrest, the commander of the State Security Force of Tehran ordered for the dismissal and detention of the two police agents directly involved a few hours after the news broke out. However, on Tuesday, June 25, 2019, he withdrew his order and postponed it to the “conclusion of investigations.” In related news, another video clip published in social media showed a young woman who had been beaten up by the State Security Force in a metro station in Tehran for improper veiling. The young woman sobs and says that SSF agents had beaten and pushed her to the ground.

It has also been reported that the regime seeks to have patrols stationed in recreational areas in upcoming days to monitor women’s observance of the compulsory veil and give them verbal warnings. (The state-run ISNA news agency – June 24, 2019)