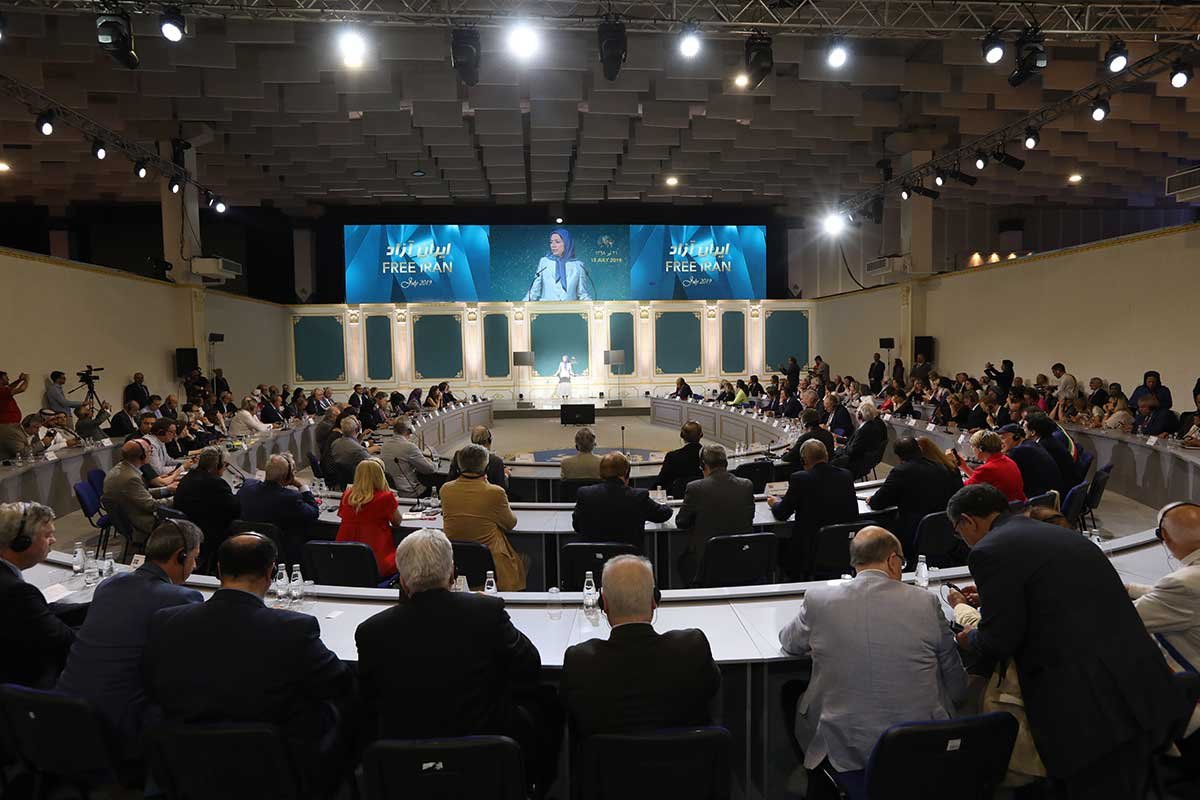 Exhibition and Conference at Ashraf 3 in Albania

Ashraf 3, home to Iran’s democratic opposition in Albania, hosted the second of a series of conferences and gatherings honoring the Iranian People’s Struggle for Freedom.
The event on July 12, 2019, featured an exhibition titled, “120 years of struggle of the Iranian people for freedom,” which was just a snapshot of the history of the Iranian people’s struggle for freedom.
Mrs. Maryam Rajavi, President-elect of the National Council of Resistance of Iran (NCRI), was the keynote speaker at the event. Former New York City Mayor Rudy Giuliani; Senator Ingrid Betancourt, former Columbian presidential candidate; Senator Joe Lieberman, former vice presidential candidate; MEP and former French defense minister Michèle Alliot-Marie; and British MP Matthew Offord, were among those who came from across the globe to attend the annual gatherings of the Iranian Resistance honoring the Iranian people’s struggle for freedom and their resistance to establish democracy and human rights in Iran.

Prior to the conference, Mrs. Rajavi and the distinguished guests took part in a ceremony honoring the Iranian Resistance martyrs at the Memorial Wall in Ashraf 3.
The conference participants visited a museum and paid homage to the vanguard of the Iranian people’s struggles and the PMOI/MEK founders.

As the first speaker to the conference, Mrs. Rajavi pointed out that, “Today, we have reached a historic turning point. Ashraf has once again risen up, proud and powerful, shining bright at the zenith of this Resistance. This Ashraf has been replicated 1000 times in the form of resistance units all over Iran. And a volatile society which is no longer willing to put up with the mullahs, yearning to overthrow them.
“We have a crisis-riddled regime engulfed in warmongering and terrorism, facing international sanctions and standing on its last leg. But the Iranian people and history are forging ahead on the road to certain victory.”
With regards to the PMOI women at the helm of the movement, she reiterated, “On this path, the PMOI/MEK, whose Central Council is made up of 1,000 heroines, is a national asset for the people of Iran. Far beyond being a mere political organization, it is the focal point for their hopes and aspirations to obtain freedom and democracy. There is no doubt that freedom will prevail over dictatorship. The Iranian people’s moment of liberation is fast approaching.”

In her brief remarks, Senator Ingrid Betancourt, former Columbian presidential candidate, said, “I’m proud of what you have done so far and what you have achieved here in Ashraf 3, for the price you’ve paid and the sacrifices you have made and today it is bearing fruit… With the help of so many dignitaries, we are making history today. Your victory is our victory and we will be very soon with you in Tehran.”

Michèle Alliot-Marie, MEP and former French minister of defense, interior and foreign affairs, was also attending the museum and conference. She said in her remarks, “I have to say that I’m very moved. What a contrast between the dramatic, horrifying images that we saw a few minutes ago. To be in contact with men and women who have given their lives for such a cause. To see what you have been able to achieve. You wish to give so much to the Iranian people. You have people who have been tortured yet you still pave the path for freedom. This visit to Ashrat 3 is very moving for us.”

General James Conway, former Commandant of the U.S. Marine Corps, also spoke to the gathering, where he said, “I participated in a policy panel in Ashraf 3 and we were invited to dinner with the ladies of Ashraf 3. And some of them shared with me their stories of sacrifice and suffering. What I saw last night in terms of the ability to endure loss and yet move on was the sense of unit cohesion and dedication to each other was the same as you see in the military. The sense of mission and dedication to accomplish it. I’m absolutely confident that with these ladies, you will make your country free someday.”

Former PMOI/MEK Secretary General Mojgan Parsaii also welcomed the guests to Ashraf 3, and pointed out, “Welcome dear friends and distinguished guests. This exhibition that you see here is a small part of a larger picture of the sacrifice made throughout decades of struggle for freedom and democracy. The story of the supporters of Ashraf who helped rescue the PMOI/MEK members is the story of honorable people… Time has shown that you stand on the right side of history. The future will show more appreciation.”