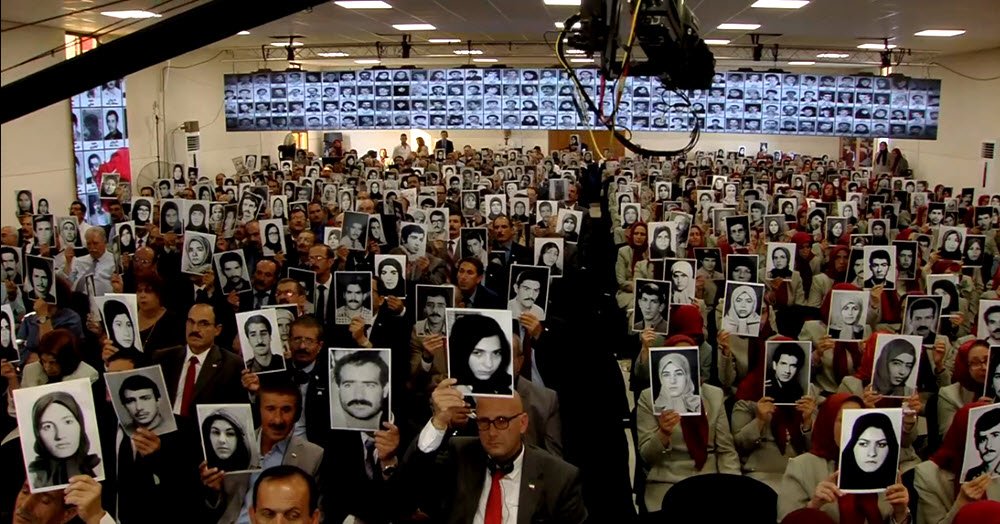 A panel of experts and witnesses discussed the 1988 massacre and the need for international prosecution of its masterminds and perpetrators on Monday, July 15, 2019, Day 5 of the Free Iran events at Ashraf 3, home to the PMOI in Albania.

In the summer of 1988, Iran’s regime summarily and extra-judicially executed tens of thousands of political prisoners held in jails across Iran. The 1988 massacre was carried out on the basis of a fatwa by the regime’s Supreme Leader Ruhollah Khomeini. Death Commissions sent victims to the gallows after mock trials. The vast majority of the victims were members of the main opposition People’s Mojahedin Organization of Iran (PMOI), also known as the Mujahedin-e Khalq (MEK).

The perpetrators of this crime against humanity have never been held accountable. Worse still, some have been promoted to the most senior positions of the Iranian government and judiciary.

Calling for Justice for the 1988 Massacre

Mrs. Maryam Rajavi, President-elect of the National Council of Resistance of Iran (NCRI), was the keynote speaker addressing the conference on the 1988 massacre. She said in part:

The massacre of the PMOI and other combatant political prisoners was a blood-drenched encounter between the Middle Ages and tomorrow’s generation, the generation that created the 1979 revolution, who represented a nation resolved to have a society based on freedom and equality, but ran into the monster of religious tyranny and the invasion of pillage and repression.

The massacre in 1988 was the horrifying scene of such historic confrontation. But it was not the end. Despite its excruciating pain and agony, it was the beginning of a new confrontation which still continues and will ultimately write the fate of the Iranian nation with the word, freedom….

Khomeini wrote in his edict, his intention in ordering the 1988 massacre was to uproot and obliterate the Mojahedin….

The latest list of victims compiled by the PMOI/MEK indicates that the 1988 massacre took place in at least 110 cities….

One of the most harmful consequences of the policy of appeasement was giving impunity to the ruling murderers, whose crimes started in the early 1980s, climaxed during the 1988 massacre and continues to this date.

Giving impunity to the clerical regime’s leaders gave them the opportunity to deny this crime according to an organized plan, just as they carried out the massacre of prisoners and those arrested according to a well-planned scheme.

I call on all Iranians in Iran and abroad to help advance and expand the Call-for-Justice movement for the victims of the 1988 massacre.

Several survivors and witnesses of Iran’s 1988 massacre gave testimony about the crimes they had witnessed.

Even children were not spared from torture

I was imprisoned for six years. The Revolutionary Guards (IRGC) arrested me while I was pregnant and took me to the torture chambers of Evin Prison. I was confined in Ward 209, where I saw four men torturing my husband in front of me. They also tortured me in front of him.

A few days later, they executed my husband with 75 others. The torturer said, “I wanted him to never see his son.”

The regime executed some 50 pregnant women, including Massoumeh, the sister of Mrs. Maryam Rajavi.

They took me to a hospital and quickly brought me back to prison even though I was very ill.

In prison, there was no doctor or medication for the children. In the public ward, there was only 15 minutes of warm water per day, which we had to use to give the children a bath. Many of these children had lost their parents in the course of the executions.

The torturers even interrogated the children. They had strapped a small child to a chair in a dark room and tortured her so she would reveal the names of her mother’s friends.

I managed to escape prison in 1987. One year later, all the women who were my inmates were executed in the 1988 massacre.

What helped us overcome the dark times in prison and to fight for freedom, was hope and faith in our leaders.

Torture in the cage and the coffin

I was a nurse in Tehran. In 1981, I was arrested because I supported the PMOI. My friend Shekar was arrested with me, and she was executed in 1988 after suffering torture in “the cage.”

We were charged with helping the people who were injured by the IRGC.

In prison, we were subjected to various severe forms of torture. They did not let us sleep and detained us in overcrowded cells. They forced us to sleep in small containers called, “coffins.”

We were forced to sit in cabins called, “the cage.” These were small partitions where you could only squat. You couldn’t move, you couldn’t even cough or sneeze. If we moved, we were tortured. At the same time, we were blindfolded.

My eyesight has suffered as a result of this torture and my back was injured. I have been operated on five times and still, I have not recovered.

We were only given three minutes per day to go to the bathroom. We couldn’t even brush our teeth. The food they gave us was scarce and very dirty. At night, when we were allowed to sleep, they would turn on loudspeakers and play the regime’s mourning songs.

The torturers sought to break and force us betray our struggle. I decided that I would teach them a lesson and show them who we are.

I decided to prepare myself for very hard days. I meticulously organized my daily schedule. I rehearsed all my school courses, all the poems I knew, all the songs. I had a physical exercise program. We weren’t allowed to move, but I exercised in my mind.

At night, when we couldn’t sleep due to the loudspeakers, I trained myself to shut down those noises and travel to pleasant places in my mind.

The hardest thing for us was the feeling of being alone. In those times, I thought of God, and I thought of my leader, Massoud Rajavi. I spoke to him, and in this way, I did not feel alone anymore.

The torturers thought they could break us through torture, but it only made us stronger, because this proved that what we were doing was right.

In prison, we considered ourselves PMOI representatives, and we deemed it our responsibility to defend our values.

When I came out of prison, the first thing I did was to join the organization. This is a path that will continue until the end.

Another witness who spoke to the conference, was former political prisoner Homa Jaberi. In part of her testimony, she said:

I was imprisoned for five years. I was tortured and I also witnessed many tortures.

I was arrested in 1981 and spent many years in Gohardasht (a.k.a. Rajai Shahr) and Evin prisons.

As the regime wasn’t able to break the PMOI prisoners through torture, they created a compound called “the residential units.”

This was a secret compound. I was there for 40 days. On the first day, I was physically beaten and brutally tortured with whips.

They blindfolded and took all of us to a room and told us that they would kill us that night. They tortured us for hours until midnight.

My hands had swollen because of the whip lashes. I was bruised all over my body and face. The torturer said, “No one will hear you. All of you will die here.”

They kept us awake for many days and didn’t let us sleep.

We weren’t even allowed to scream under torture. Every command was given with whip lashes. For instance, if they wanted to tell us that we could sleep, they would do so by whipping us.

I was taken to Evin Prison after 40 days but some of my friends were kept in this place for six months. Some of them consequently lost their mental balance.

Some of the prisoners would not even speak of the tortures they had suffered in “the residential units.” Some others said that the torturers made them make animal sounds or insult themselves. Some had been raped.

The faith and trust we had in our leadership helped me overcome the tough conditions of prison.

At least 55 pregnant women among those executed

Fereshteh Akhlaghi, from the PMOI Research Unit on Martyrs, was also among the conference speakers who shed some light on the crimes of the clerical regime has committed in its prisons. She said in part:

The exhibition you saw is only the tip of the iceberg, and I would like to provide some information to shed further light on the extent of the clerical regime’s crimes in Iran.

In just two years, the regime executed 477 adolescents and youth, including three 12-year-olds, eight who were 13. Nineteen were 14 and another 32 were 15 years old. Others were 16 and 17 years old.

We have compiled the names of at least 55 pregnant women among those executed. The sister of Mrs. Rajavi was executed while six-month pregnant.

One of these pregnant women was summoned by the executioner and told that her husband had been executed. The executioner then offered to release her if she would do an interview with the state television. In response to this offer, she spat in his face.

A husband and wife were arrested and tortured to the extent that they could not recognize each other when they met after two weeks.

The regime also executed and tortured the elderly. The mother of the Shafaii family, most of whom had been killed or executed, was also executed by the regime. Before her execution, she said, “I’m proud that I’ve given my all for freedom.”