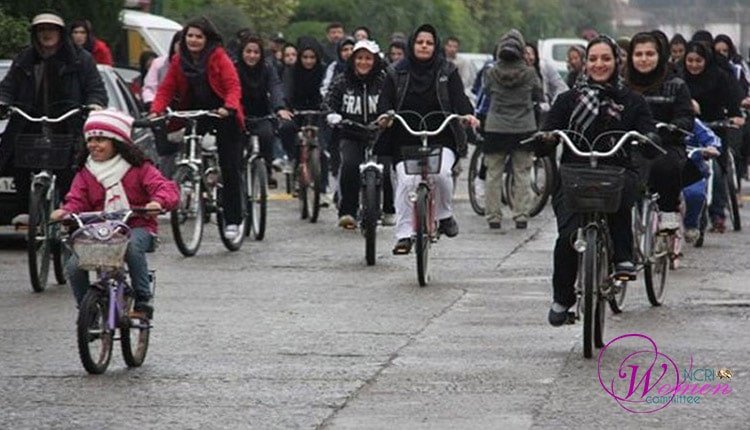 Ismaeli did not provide any details particularly around the timing of the arrests of the 70 women cyclists. (The state-run ISNA news agency – July 30, 2019)

Earlier, Massoumeh Ebtekar, Rouhani’s deputy in family and women’s affairs, had earlier confirmed that “there are no rules in Iran which could prevent women from riding bicycles.”

Last July, a research done by the Office of Cultural Studies of the Research Center of the mullahs’ parliament indicated that some 70% of Iranian women do not believe in the mandatory dress-code, namely the head-to-toe black veil called “chador.” Nevertheless, the regime has further stepped up pressure and restrictions on women under the pretext of improper veiling.

Agents of the Public Places Police have instructed women clerks working in some Tehran shopping centers to wear the Maghna’eh instead of simple scarves or shawls, otherwise their shops would be sealed and shut down.

In another development, Abol-ghassem Shirazi, head of Tehran’s Union of Clothing Manufacturers and Wholesalers, announced that they are implementing a plan to tackle and prevent production and sale of see-through or open-front women’s manteaux. (The state-run ISNA news agency – July 31, 2019)

In Gilan Province, northern Iran, commander of the State Security Force, Mohammad Reza Is’haghi, announced that they had sent 66,000 text messages to drivers in this province, carrying female passengers who had dropped their veils inside the car. (The state-run ILNA news agency – July 31, 2019)

Early this month, commander of the Airport Police also announced that his forces would deal with passengers who promote western dressing styles or drop their veils. He said they would even prevent women who are considered improperly veiled. (The state-run ISNA news agency – July 1, 2019)