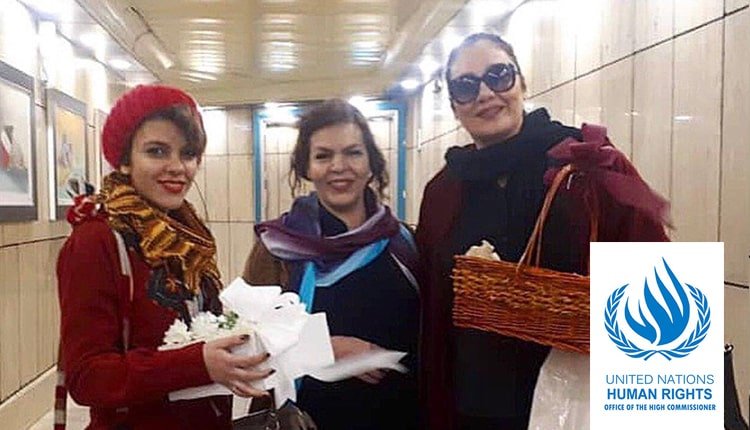 The Iranian regime’s issuing of 55 years of prison sentence for three women’s rights activists in Iran has aroused widespread international outrage. The Revolutionary Court of Tehran informed Yasaman Aryani, Monireh Arabshahi, and Mojgan Keshavar of their sentences in the absence of their lawyers on Wednesday, July 31, 2019.

On August 16, 2019, the office of the High Commissioner for Human Rights issued a statement condemning the 55-year prison sentence for three women’s rights activists in Iran, saying, “UN human rights experts have condemned lengthy prison sentences against three Iranian women who are being arbitrarily detained for publicly protesting against the compulsory wearing of veils.”

In their statement, they said, “We are alarmed that the arrest and lengthy sentences handed to these women are directly related to the peaceful exercise of their rights to freedom of expression and assembly in the pursuit of gender equality in Iran.”

The experts added, “We call upon the Iranian authorities to quash these convictions and immediately release all human rights defenders who have been arbitrarily detained for their work in advocating women’s rights, and to ensure full respect for the rights of women to freedom of opinion and expression, peaceful assembly and non-discrimination.”

The State Department spokesperson Morgan Ortagus in a tweet on August 14, 2019, wrote, “We condemn the Iranian regime for sentencing Yasaman Aryani, Monireh Arabshahi, and Mojgan Keshavarz to 55 years in prison for protesting compulsory hijab laws while simply handing out roses.”

Bärbel Kofler, German Commissioner for Human Rights Policy and Humanitarian Assistance at the Federal Foreign Office, also issued the following statement on August 12, 2019, on the sentencing of three women’s rights activists in Iran:

“I am appalled by the handing down of long prison sentences to the three women’s rights activists Mojgan Keshavarz, Yasaman Aryani and Monireh Arabshahi.

“They campaigned peacefully and with great dedication for the rights of women in Iran. They protested against the compulsory wearing of headscarves and handed out flowers!

“I call for the immediate release of these women and of all other detained women’s rights activists and call on the Iranian Government to honour the human and civil rights obligations it has undertaken to respect.”

The Women’s Committee of the National Council of Resistance of Iran had issued a statement strongly condemning the medieval sentences issued by the clerical regime’s Judiciary for the three women’s rights activists and urged all international organizations defending and advocating women’s rights, human rights and freedom of expression, to condemn these medieval sentences and adopt binding measures against the misogynist clerical regime.